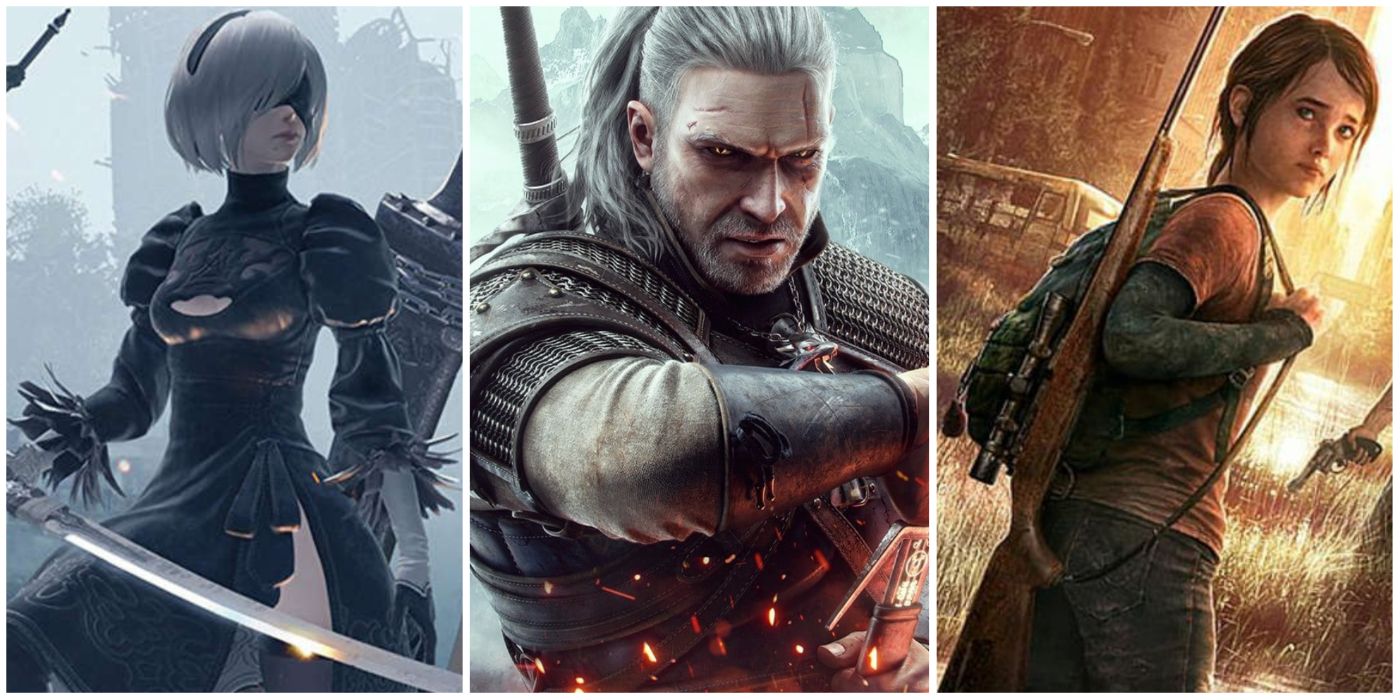 There are tons of different reasons why a particular video game draws in its audience. There are looter-shooters like the Borderlands series that put a heavy focus on cooperative play and collecting new gear, and expansive open-world titles such as Breath of the Wild that are ripe with exploration and creative problem-solving. Then, there are titles that are most fondly remembered for just how remarkable their single-player storylines are.

Although multiplayer, live-service experiences have been incredibly popular in recent years, this hasn’t stopped a plethora of phenomenal story-driven single-player games from being released as well. Players can still appreciate games that hook them in with compelling characters and an immersive setting, and some of them stand leagues above their competition.

10/10 Explore & Survive In A Post-Apocalyptic Wasteland

When players begin Fallout: New Vegas, the premise seems rather simple: players are put into the role of a Courier who’s lost their memories. All they remember is that they need to deliver a very important package, but the world quickly immerses players with its wealth of characters and rich lore.

Fallout: New Vegas fills its world with conspiracies, warring factions, and hidden secrets, with the player placed at the center of it all. Over a decade after launch, and with multiple Fallout titles released after, many fans still consider New Vegas to have the best setting and story of any game in the series.

9/10 Both The Base Game & DLCs Have Top-Notch Stories

The Witcher 3: Wild Hunt centers around Geralt of Rivia, also known as the Witcher. Essentially, players are put into the shoes of a monster hunter for hire. While slaying beasts is a large part of The Witcher 3‘s gameplay, it’s the overall story that sticks in players’ minds the most.

RELATED: 10 Video Game Covers That Were Cooler Than The Game

The main plot of The Witcher 3 sends Geralt on a quest to find Ciri, his adoptive daughter who’s being relentlessly hunted by the Wild Hunt. With the release of both the “Hearts of Stone” and “Blood and Wine” expansions, The Witcher 3‘sstory is elevated even further.

The Last Of Us

Right from the very start, The Last Of Us lets players know that it isn’t going to be pulling any punches. Players are introduced to Joel and his daughter Sarah, and this father-daughter pair is forever torn apart by the end of the opening gameplay.

Tragedy is laced throughout the entirety of The Last Of Us, but this is also one of the things that makes it so compelling. Joel unexpectedly bonds with another young girl named Ellie, and the bond the two of them share is as heartwarming as it is heart-wrenching.

7/10 Find Hope Within A Hopeless Situation

NieR: Automata‘s story is presented to the player uniquely, having various endings that players must progress through before getting to the game’s true final ending. The plot is centered around three androids, 2B, 9S, and later A2, who fight in the hopes that humanity will one day be able to return to the currently-uninhabitable Earth.

It’s revealed that this fight for humanity’s overall survival is nothing more than a myth, with humanity having been extinct for a long time. Despite this, NieR: Automata manages to lace hopeful themes into its seemingly-hopeless world, creating an unforgettable contrast.

The Wolf Among Us

Sheriff Bigby Wolf is tasked with keeping the citizens of Fabletown safe in The Wolf Among Us, but this is no easy task. Along with Snow White, Bigby Wolf has to solve a murder case, and things quickly become much more complicated than they seem.

RELATED: 10 Video Games That Lied To Their Audience

There’s a dark underbelly beneath Fabletown that Bigby is completely oblivious to, and players must personally uncover its secrets themselves. Heavy focus is put on player choice, and The Wolf Among Us is so highly praised that a second season is in development for 2023.

Although future titles in the franchise don’t come close to matching its brilliance, the original Walking Dead Game is beloved by fans to this day. Players follow Lee Everett right as the zombie apocalypse begins, and he quickly bonds with a young girl known as Clementine.

The two of them become inseparable over the course of The Walking Dead‘sfive-episode run. Through all the heartbreak and tragedy, Lee wants nothing more than to protect Clementine and help her find her parents — two goals that both turn sour by the end of the game.

Undertale forever changed the way players think about their enemies in RPGs. In most RPGs, killing enemies is expected of the player, and the main way to obtain various things like experience points, items, and new powers.

In Undertale, however, killing enemies is as brutal as it sounds, and has a direct impact on the game’s ending. There are three main endings, known as the Neutral, True Pacifist, and Genocide routes. Undertale forces players to rethink how they see NPCs, as there’s a tangible consequence for doing so.

3/10 Stay Loyal Or Stick To Your Own Ideals

Players take on the role of outlaw Arthur Morgan in Red Dead Redemption 2, just as the age of outlaws in the Wild West is coming to an abrupt end. The West is slowly becoming a land of laws, and players will have to face off against both government officials and rival gangs.

The overall plot, world, and characters of Red Dead Redemption 2 are highly immersive, with many players sinking several hundred hours into the title and still wanting more. Not only is the main story engaging, but there’s a plethora of side content to get lost in as well.

2/10 Fight Back Against Unfairness & Corruption

The definitive edition of Persona 5, Persona 5 Royal features an entirely new third semester and two brand-new characters. Players take on the role of Akira Kurusu, a high-school student who’s been expelled and sent to live elsewhere after stopping a politician from taking advantage of a woman.

Persona 5 Royal focuses on the corrupt nature of society and teenagers who’ve been wronged by adults fighting back against said corruption. The main storyline is compelling and made even better by the wealth of deep, complex characters players get to know as they go through.

Until Dawn is a cult classic among horror fans, for both its gripping story and the way its atmosphere and controls fully immerse players. One year after the disappearance of Hannah and Beth Washington, their brother Josh invites their friend group back to the mountain where they went missing.

Things quickly turn dark as it’s discovered that the mountains are haunted by the Wendigo spirit, and a fun night with friends transforms into a struggle for survival. Players slowly piece together the mystery of both the Wendigos and the Washington sisters’ disappearance as they play, with clues scattered throughout the world.

NEXT: 10 Games With The Best DLC