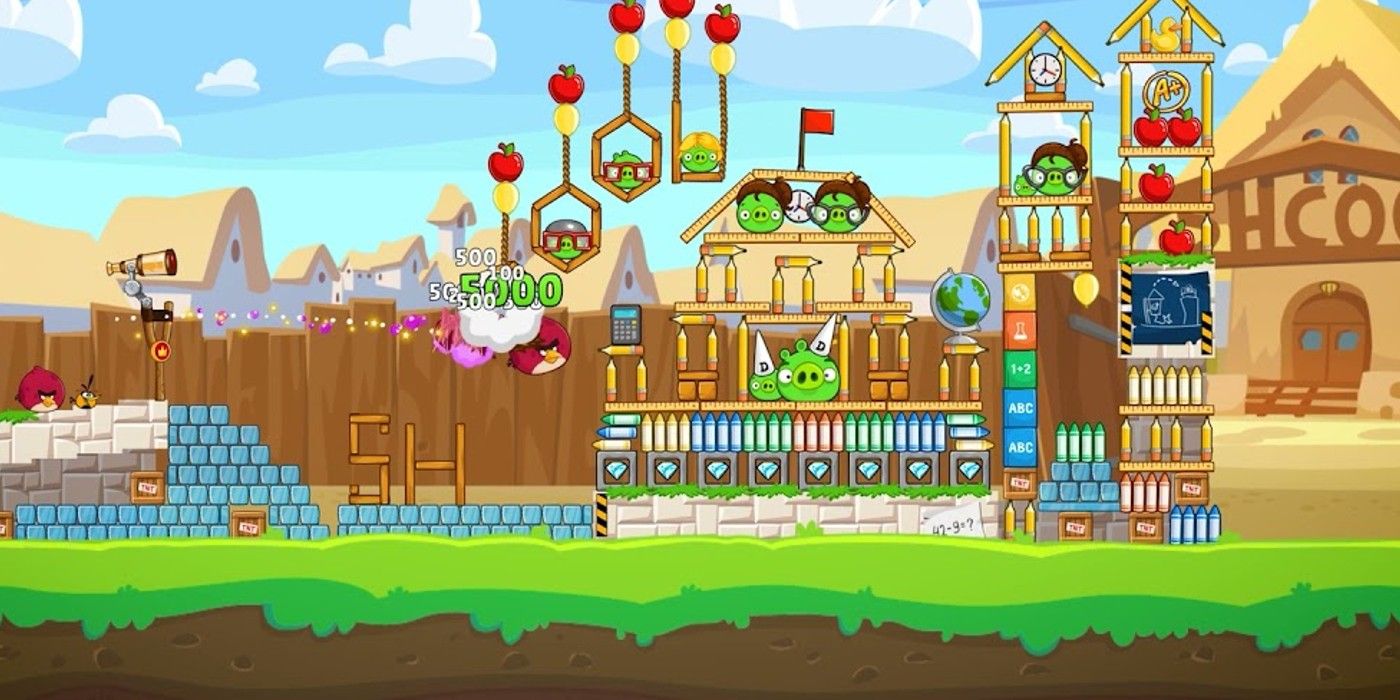 Everyone has played a mobile game that they deem a guilty pleasure at some stage in their lives, and they often go back to that comfort game time and time again. 2022 demonstrated that mobile gaming is still looking to evolve, with the success of Marvel Snap and upcoming updates for titles such as Among Us, indicating that the audience is still hungry for further content on the platform. However, even in 2023, some familiar titles continue to be deemed guilty pleasures, despite drawing in a larger fan base that enjoys interacting with the digital experience, even in secret!

Just like the best guilty pleasure movies, guilty pleasure games can be defined by those titles that might not be deemed as high quality. These games might be intended for older or younger age groups than the interacting players, or they could seem far too simple in their design. These games might not be as technically complex as other projects on the market, but they continue to boast mainstream appeal. However, they always provide a moment of light entertainment in an increasingly stacked industry and no one should truly feel guilty about playing through a title that so many worked hard on and is super enjoyable.

Hits such as the five-letter word phenomenon, Wordle, have demonstrated that players are looking to stretch their minds by interacting with word-based puzzles. This iOS and Android title from PeopleFun plays on some of the genre trends of recent years. Indeed, this entry into the puzzle genre is simple in its premise, but can quickly become complex in its execution, continuously creating complicated Hangman-esque word equations to solve.

Filling in the gaps to decipher the missing words from a selection of letters will always be satisfying, and it’s that instant gratification that ensures gamers keep returning. Although these types of titles can be deemed guilty pleasures because they barely reinvent the wheel, that doesn’t make them any less rewarding and they’re worthy of being measured against the best world puzzle games like Knotwords.

It’s rare that the cinematic franchises perfect for adaptation are considered guilty pleasures considering the wide audience they have garnered. For example, recent movie titles like Star Wars: Galaxy of Heroes maintain a dedicated crowd. But, Despicable Me: Minion Rush hits on all the goofy absurdity that fans might expect. Developed by Gameloft, the award-winning kids’ game is available on Android, iOS, and PC.

Acting as a simple platform runner, there is nothing inventive about this straightforward race to the finish, but gamers still love secretly coming back to unlock the wacky Minions and courses to blast through. It might thus seem as though it’s marketed towards younger players and therefore fits that guilty pleasure category, but it’s too whimsical not to enjoy playing as Gru’s colorful henchmen.

RELATED: 10 Mobile Apps That Were Banned From App Stores

Streamlined designs are often the most effective in the mobile market. Helix Jump is a newer release that generated some buzz as one of the best puzzle games, thanks to its fast-paced gameplay and addictive puzzles that require quick-timed coordination. The H8 Games title, which is available on iOS, PC, and Android, is already a guilty pleasure that is likely to stick around.

Helix Jump doesn’t shy away from its basic premise, which sees players controlling a ball that they must allow to fall to the bottom of a trap-filled course, timing their movements perfectly to avoid disaster. It might appear to be mind-numbingly mundane, but a surprising amount of skill is required to truly succeed, forging a guilty pleasure in the process. It’s not exactly one of the best story-driven games on mobile, but it doesn’t need to be!

Flappy Bird holds an intriguing place in video game history. A title that acts as the definition of a video game fad within its genre, the popularity of Flappy Bird was almost overwhelming, and it was eventually shut down due to its addictive nature. The original incarnation from Dong Nguyen and Dot Gears is no longer a viable iteration. But despite its unavailability, fans have found plenty of copycat alternatives.

Featuring only one control, players had to keep their flapping bird in the air as long as possible, as they avoided obstacles that were sure to down the poultry protagonist. It was deemed to be a brief trend aimed at those who perhaps didn’t take gaming seriously, but secretly, everyone enjoyed the streamlined and intuitive gameplay of this guilty pleasure, which has since been transformed into a goofy battle royale game.

RELATED: 10 Mobile Games That Redditors Think Are Worth Playing

Temple Run follows a similar premise as popular releases like Despicable Me: Minion Rush, but it is arguably the most well-liked variation of a running platformer game on mobile. Developed by Imangi Studios, the world-building of Temple Run is pretty fun, but it’s the high-stakes racing that allows it to stand out. Temple Run will continue to get quicker and quicker as the protagonist races across gorgeous scenery while getting chased by a primate foe.

While the gorilla antagonist is a constant threat, the iOS and Android game also throws in plenty of physical obstacles to jump over and dive under in order to succeed. The appeal of the track is that it feels almost endless, which suggests that players could put a great deal of time into the game without ever getting anything back. Alongside this fact, the goofy aesthetic makes this a guilty pleasure to be played by some in secret, as a far-from-serious download.

With a relatively accurate video game adaptation, there are very few mobile titles that have reached the levels of fame as Angry Birds, which remains a guilty pleasure for players across the globe. With no shortage of titles inspired by the original hit, Angry Birds is such a satisfying play. The title and its debuting sequels have evolved the concept into bolder territory, but ultimately the first Rovio Entertainment and ak tronic Software & Services GmbH release remains a Windows, iOS, and Android classic.

In its first incarnation, players would fire their angry birds at a range of towers, knocking down pigs and creating general chaos. It was supposedly a game aimed at kids, but it has become a vibrant guilty pleasure for players of all ages who love the absurdity of pitching these animal icons against one another in a completely bamboozling display of design worthy of its own video game theme park.

Not only is Candy Crush Saga available via Android and iOS alongside a Windows format, but its popularity and guilty pleasure status as a mobile game meant that the King title was even accessible via social media sites like Facebook. Plenty of sequels have ensured continued success for the experience, with Candy Crush Saga now reaching its 10th anniversary.

All players have to do is match the same candies before time runs out. But with bonuses, boosts, and increased pressure as the game goes on, the addictive nature of Candy Crush Saga has truly captured the minds of gamers. The gamehit a certain generation at the right time, and while it might appeal to older audiences, younger fans pick it up as a guilty pleasure that doesn’t require skill or a great deal of thought, with plenty of Candy Crush Saga tips and tricks to learn along the way.

Subway Surfers is another title that finds itself in the runner/racer category, akin to the likes of Temple Run. However, its graphic style and train obstacle course do make a real difference, as gamers run across rooftops and dive under subway stops. Created by Kiloo and SYBO, this endless runner on iOS and Android is exactly what a mobile game should be, with plenty of available downloadable mods to enjoy.

Fans can pick the popular 3D experience at any point, dive straight in, and see if they can compete with themselves and the leaderboard to get as far as possible. With Subway Surfers’ codes unlocking the roster, there are lots of faces to choose from. It’s that endless runner setup that makes this a guilty pleasure, with players knowing they can’t truly make progress, but it’s not a waste of time if it’s enjoyed.

Fruit Ninja, as a concept, has come in so many forms. Whether it’s back on the PlayStation 2 and the EyeToy or in its more recent formulas involving mobile gaming, cutting down fruit with a sword is just so appealing. Halfbrick Studios came up with the perfect version. Available on iOS, Android, and Windows, all players have to do is chop through the right fruit.

It’s more difficult than it sounds though, especially as the game develops. The award-winning outing has demonstrated its longevity, appealing to all ages with its quick-paced approach, despite having originally been marketed to younger audiences. The guilty pleasure might feel like just a great kids’ game to some, and it is a completely silly concept, but it’s just so compelling to slice and dice.

Happy Wheels is often associated as a Windows title despite its Android setup, thanks in part to its level of customization. But it is available on Android and iOS as well and is the kind of title that everyone has played at some stage, even if it isn’t quite as mainstream as other heavy hitters. In it, players have to ride their vehicle of choice through a dangerous and violent series of obstacles.

The game from Fancy Force might be gory and feature some slightly more mature jokes, but the silliness of it all has fans coming back to take on its hard arcade courses. That’s where it becomes a guilty pleasure, with players probably putting far too much time into designing tracks they know they could never master, in a game that is perhaps more about having fun crashing than it is surviving.