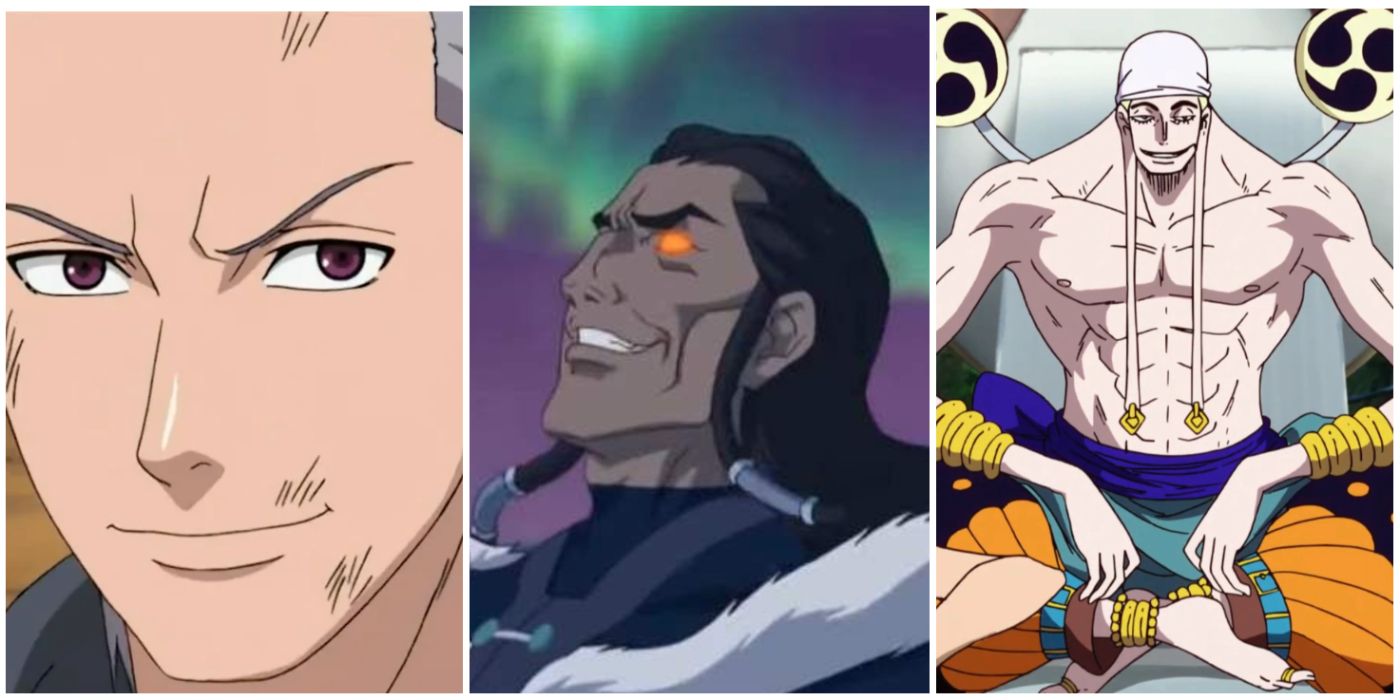 Anime villains are typically considered amoral monsters who answer to no one except themselves. Their complete lack of morality makes it difficult for anyone to reason with them, often necessitating the usage of violence in order to save the day.

RELATED: The 10 Most Grateful One Piece Characters

However, a handful of antagonists are deeply spiritual and feel accountable toward a higher power. Although this means they ascribe to some semblance of order, they are often so zealous that they prove equally hard to reach. This becomes especially true if the villain in question actually thinks that they themselves are a god.

10 Eneru Was Convinced Of His Own Divinity At Skypiea

Eneru was the most powerful villain Luffy defeated in the first half of One Piece. His Logia-based Devil Fruit made him untouchable to the people of Skypiea and provided access to three hundred million volts of electricity.

Given that Eneru genuinely believed himself stronger than everyone, he was convinced of his own godhood. He forced the locals to worship him as a deity and appointed his strongest soldiers as “high priests.” Nonetheless, his defeat indicated how human he actually was.

9 Ludociel Was A Fanatical Servant Of The Supreme Deity

Ludociel was a fanatical servant of the Supreme Deity in Seven Deadly Sins. His loyalty to the Archangels was so complete that he sought to exterminate all demons from both Britannia and the underworld. Although Ludociel’s sense of justice was an asset against the Ten Commandments, it also had dire ramifications.

For example, Ludociel emboldened the Holy Knights with a false sense of strength so that they would more readily die for him. Similarly, he considered Meliodas an enemy and fully intended on killing him when the opportunity presented itself.

8 Paster Nick Was Once An Obstacle For The Scouts

Pastor Nick was one of the most foreboding individuals in Attack On Titan. His doomsday prophecies further destabilized Paradis worse than it already was, and he claimed that divine retribution was imminent. At first, Nick was completely uncooperative with the Scouts and difficult to interrogate on account of his spiritual nature.

When he eventually became an ally, the Military Police assassinated him since he knew too much about the country’s origins and was a danger to the reigning authority. Nick’s demise furthered the wedge between the Scouts and their masters within the government itself.

Alexander Anderson was a major Hellsing antagonist and a greater threat to Alucard than anything seen in the Millennium Organization. A deeply spiritual man, his status as a paladin enabled usage of holy weapons that were specifically designed for killing vampires.

When he was losing the final fight against Alucard, Anderson imbued himself with a thorn from the crown of Christ. It significantly increased his already formidable strength at the cost of his humanity, which illustrated how Anderson lost sight of his duty to protect the innocent in pursuit of killing monsters.

Unalaq was the second main antagonist of Legend Of Korra and perhaps the strongest villain of the entire series. After absorbing Vaatu and becoming a dark Avatar, he attacked Republic City and nearly destroyed it outright.

Ultimately, Unalaq’s goal was to combine the physical and spiritual worlds since he felt that both would ultimately benefit. His schemes were a success, and the fallout caused numerous issues that haunted Korra for the remainder of the series.

5 Hidan Sacrificed The Innocent To Jashin

Hidan was Naruto’s most spiritual villain. Everything he did was for Jashin, a mysterious deity who allegedly fed off the victims that were sacrificed. Hidan’s goals often clashed with Kakuzu’s since the former was explicitly driven by religion while the latter had more financial interests.

Luckily, given that both men were relatively “immortal,” their constant disagreements and infighting were of little consequence. Considering that Hidan took great joy in murdering his victims, it’s possible that he interpreted Jashin’s will how he wanted so that he could feel morally justified in murder. In the end, Hidan experienced the same terror his victims felt in his final moments.

Doctor Londes was the leader of Cowboy Bebop’s Scratch cult. Its primary teaching was that one’s physical body was weak and flawed. Therefore, its members were told to take their own lives as soon as possible so that they could be “downloaded” into eternal cyberspace.

Given Scratch’s rapidly increasing reach, it made Spike’s mission to defeat him a top priority. By cornering Londes’ physical body, the heroes managed to subdue his influence before he could harm Faye Valentine.

3 Father Mozgus Relished Punishment In The Name Of Righteousness

Father Mozgus was a major antagonist in the Berserk series. Although presenting himself as a profoundly spiritual and compassionate man, he took sadistic glee in “torturing” those he viewed had sinned.

Mozgus’ temperament was prone to changing rapidly, which made every second in his presence a harrowing nightmare. He even identified with the symbol of “four breaking wheels,” which indicated his willingness to use torture in order to “free people from evil.” In many cases, the victims of Mozgus’ depravity did not survive.

The Evangelist was the main antagonist of Fire Force. Residing in a plane beyond mortal comprehension, she needed Pillars in order to enact a second global upheaval that would destroy the planet itself. The Evangelist’s private cult were known as the White-Clad and were completely devoted to her mission.

Having hollowed out their identity specifically to serve her, they dedicated themselves to unleashing a second cataclysm upon the world. They drew strength from their dark progenitor, worshipping her as a deity destined to cleanse the world in fire and brimstone.

Pucci was DIO’s greatest minion in JoJo’s Bizarre Adventure. After hearing about the vampire’s discussion of Heaven and its ramifications, he was left with much to think about. Upon DIO’s death, Pucci inherited his mission and obsession with the Joestar family. At Cape Canaveral, Pucci evolved his Stand into “Made In Heaven.”

It became so powerful that it could accelerate the universe and effectively even “reset” it. This allowed Pucci to create a world without obstacles and where the Joestar family functionally never existed. Although Emporio defeated him and restored the Joestars to a degree, they weren’t the same people he’d come to know and respect.

NEXT: 10 Smartest Leaders In My Hero Academia, Ranked