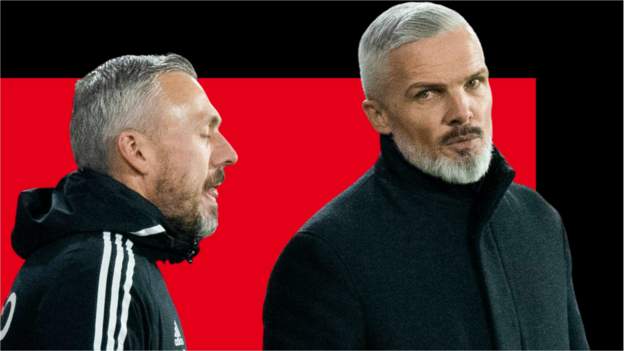 It could be a quiz question: name the team that beat Real Madrid in a European final, went on to win the European Super Cup, but years later lost a domestic cup match to a team five levels below them.

That is mere trivia to some, but to fans of Aberdeen, it is a measure of their club’s slide.

The Scottish Cup fourth-round exit at Darvel on Monday is surely the worst result in Aberdeen’s 120-year history and few can suggest a greater upset in almost 150 years of the Scottish Cup.

The wee man atop the oldest trophy in world football must have almost fallen off his perch when he heard the score at Recreation Park.

Here, as the Aberdeen board gathers to assesses the choices facing club chairman Dave Cormack over manager Jim Goodwin, BBC Scotland looks at the ignominy that has befallen the club.

From continuity to chaos

In the eight years from 2013 that Derek McInnes was Aberdeen manager, Aberdeen were steady. They won the League Cup in his first full season in charge, their first silverware since 1995.

They finished third in the league in 2013-14 and were then runners-up to Celtic four times in a row, albeit with Rangers absent from the top tier for the first two of those.

From 2018-19 onwards, the Old Firm duopoly resumed but Aberdeen did not finish third – Kilmarnock, Motherwell and, in McInnes’ final year, Hibernian, earned the “best of the rest” tag.

They did, however, get to two further League Cup finals and a Scottish Cup final under McInnes, losing to Celtic in all three.

By spring 2021, and with Aberdeen waning, Cormack said he and McInnes felt it was “the right time for him to step down”.

The chairman went down the path of appointing a former player as the next manager, Stephen Glass following where favourites such as Willie Miller and Mark McGhee had dared to tread previously.

His only previous managerial experience was in the second tier in the United States with Atlanta United 2.

Glass lasted 11 months, the blemish-free sparkle of his early reign shattered by ninth place in the Scottish Premiership and a Scottish Cup exit at Motherwell.

The frailties that did for Glass – a porous defence and a poor away record – are haunting the incumbent. Should he survive until 19 February, Goodwin will have lasted a year in the role.

Who is to blame – the manager, the players, the chairman?

Former Aberdeen defender Richard Foster was horrified at what he witnessed in the 1-0 defeat by Darvel, the West of Scotland Premier Division champions and worthy winners in the cup tie.

“Players have to own the responsibility,” he told BBC Scotland. “If you’re a professional player and you need your manager [to gee you up] before a game, that you know is a potential banana skin, you don’t deserve to be there.

“After five minutes I’m thinking, ‘Aberdeen have chucked it, they don’t look interested, they don’t look like they are willing to go into tackles or out-work Darvel’. That is nowhere near the level they need to be.

“I don’t think any of them really showed any desire to be there. That can’t all be levelled at the manager. The players need to look at themselves in the mirror.”

Steve Wilson of Dons Supporters Together says fans are at “the lowest ebb possible” after the cup defeat and lamented the absence of “fight, passion, leadership” in the team.

He feels that while Cormack cannot be accused of being parsimonious with the transfer budget, he questions some of the chairman’s appointments.

“He has certainly backed Goodwin,” Wilson told BBC Scotland. “But you’ve maybe got to look at the likes of Darren Mowbray [head of recruitment] and Steven Gunn.

“What are Steven Gunn’s credentials to be a director of football? None, as far as the fans are concerned. He’s just been around the club for a long time.”

For Wilson, you don’t have to look far to find the major cause of Aberdeen’s predicament.

Aberdeen have lost good defenders in recent seasons and have not replaced them with players of the same quality. They sold Calvin Ramsay to Liverpool last summer for £4.2m, Declan Gallagher left for St Mirren, Andrew Considine for St Johnstone and David Bates went to Mechelen.

A year ago Cormack said the club had “recouped the vast majority” of the spend on Venezuela international Ronald Hernandez as he moved on to Atlanta. Prior to that, Scott McKenna parted for Nottingham Forest and McInnes stalwart Ash Taylor left for Walsall.

Former captain and manager Miller has praised the chairman and manager for their purchase of attacking players such as forwards Bojan Miovski and Duk. However, he bemoans the flaky defending, especially away from home.

After Aberdeen’s recent 5-0 thrashing by Hearts, Miller said: “The fact they need defenders is something I’ve highlighted over the course of the season. They have got a lot of good players but it doesn’t make them a good team.

“At home they seem to be able to perform and play some attacking, exciting football, but on the road, they’re just dreadful. There needed to be a bit more recognition of the defensive side in that spending.”

Should Goodwin stay or go?

Goodwin’s star was on the rise at Alloa Athletic, having helped them gain promotion to the Championship and having kept them there on a small budget. He caught the eye enough at St Mirren to attract Aberdeen.

Though he took an hour to emerge from the away dressing room at Darvel, he did not shirk when asked for his thoughts on the performance.

“Extremely disappointed, embarrassed, humiliated, all of those things, really,” he said. “I do believe I can turn it around, absolutely. I have confidence in the squad. We are going through a difficult period but we have to stick together.

Just before Christmas, Aberdeen led Rangers 2-1 with five minutes of added time on the clock. By the 98th minute, Goodwin was crouching on the touchline, seemingly winded at the incomprehensible concession of two Rangers goals.

In the previous match, he was three minutes away from holding Celtic at Pittodrie before a Callum McGregor strike rendered 87 minutes of ultra cautious football worthless.

And 10 days ago, the lost to Rangers again, this time in extra time at Hampden in the Viaplay Cup semi-final. In injury time, with the tie at 1-1, his captain Anthony Stewart was sent off for a needless, reckless challenge.

Foster admits to unease about suggesting someone should lose their job, but can see no option for the Aberdeen board.

“Unfair as it is, when you’ve lost the dressing room there’s no way back.” he said. “I’ve been part of dressing rooms like that.

“It looks like they are not willing to work hard for Jim Goodwin, which is a sad indictment on the players. But once that line has been crossed it is very hard to get that back.