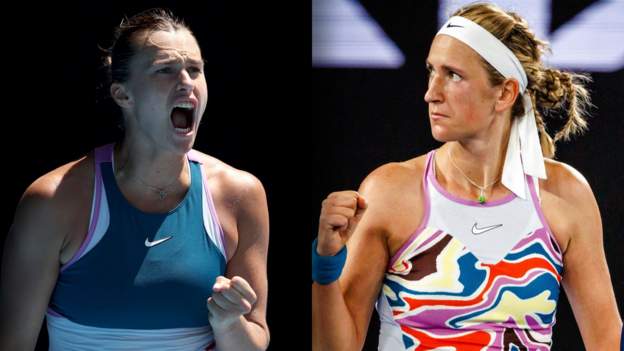 Aryna Sabalenka says she “really wants” to create history by setting up an all-Belarusian contest against Victoria Azarenka in the Australian Open final.

However, two Belarusians competing for a Grand Slam title would likely lead to more discussion about a divisive political issue in sport.

Belarusian athletes are banned by a number of sporting governing bodies because of the country’s support for Russia’s invasion of Ukraine.

Sabalenka has previously said “no-one supports war”, adding she was “really disappointed” politics had interfered with sport after Russian and Belarusian players were banned from Wimbledon last year.

Speaking about the prospect of facing Azarenka in the Melbourne final, Sabalenka said: “It would be history and be unbelievable.

Former world number one Azarenka, who is bidding for a third Melbourne title 10 years after her last win, meets 22nd seed Rybakina at 08:30 GMT.

Sabalenka – who has lost all three of her previous Grand Slam semi-finals – is the favourite to beat Linette, an unseeded 30-year-old who had never before progressed past the third round of a major.

The political issue which won’t go away from sport

In tennis, players from Belarus and Russia are allowed to compete but not under their national flags.

Russian player Karen Khachanov is also through to the semi-finals of the men’s singles in Melbourne.

The All England Club, which organises Wimbledon, has not yet said if it intends to maintain its ban on Russian and Belarusian players at this year’s tournament.

Both the AELTC and the Lawn Tennis Association (LTA) were fined for banning players last year and the tournament had its ranking points removed.

American great Billie Jean King, who won 12 major singles titles and is a key advocate for equality in the sport, has called for Russian and Belarusian players to be allowed to play.

“Just keep it the same way the other ones are,” said King. “Life is too short.”

Sabalenka, who reached the last four at Wimbledon in 2021, said the impact of the political decisions affected her “a lot” and are “still tough” to deal with.

“I understand that it’s not my fault. I have zero control. If I could do something, of course I would do it, but I cannot do anything,” said Sabalenka, who also reached the last four at the 2021 and 2022 US Opens.

“Having this understanding really helping me to stay strong.”

Meanwhile at the Australian Open, security staff have been instructed to confiscate Russian and Belarusian flags from fans.

On Wednesday, police had to intervene when tournament security guards were threatened after spectators waved Russian flags – including one with Vladimir Putin’s face on it.

Like Sabalenka and Azarenka, Rybakina has also had to face questions about the decisions made by tennis’ governing bodies because of Russia’s invasion of Ukraine.

Rybakina was born in Moscow but changed allegiance in 2018 after receiving greater financial support from Kazakhstan.

Her Wimbledon victory came after Russians were banned from playing, but said earlier this week there was “nothing more to say” about the subject.