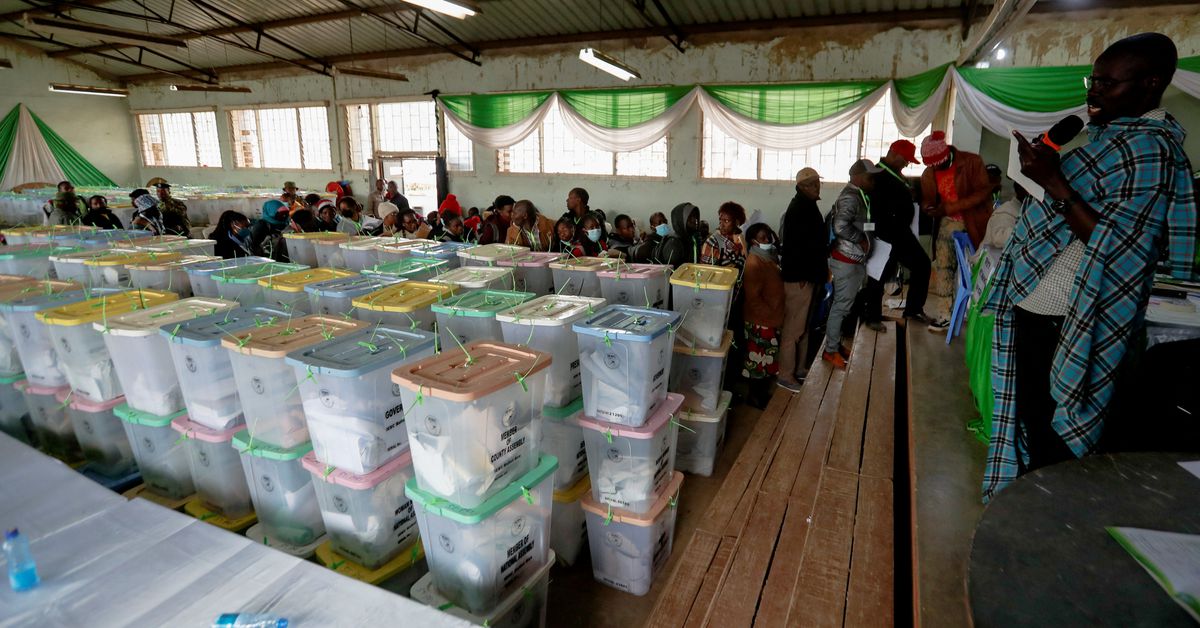 NAIROBI, Aug 11 (Reuters) – Two days after Kenya’s general election, officials had yet to announce who is leading the presidential race in East Africa’s regional powerhouse, as confused citizens struggled to make sense of divergent tallies from the media in a nail-bitingly close race.

Media houses are compiling results from images of forms that the election commission uploaded on to its website from more than 46,229 polling stations, a mammoth task that means their tallies lag far behind the amount of raw data available.

Some citizens worried the media’s differing tallies could inflame claims of rigging, which have sparked violence in past elections. Many urged fellow citizens to wait for the official results.

“There is so much impatience due to media reports, because they are varying. Given the experience that we have in Kenya, we have to be patient and just wait,” said Ongao Okello, as he scrutinized newspapers being sold on a street corner in the western town of Eldoret.

Results are being watched carefully: Kenya is the region’s richest economy, a stable nation in a volatile region and a close Western ally that hosts regional headquarters for Alphabet (GOOGL.O), Visa (V.N) and other international groups.

Veteran opposition leader and former political prisoner Raila Odinga, 77, is making his fifth stab at the presidency. He is neck and neck with Deputy President William Ruto, 55.

Outgoing President Uhuru Kenyatta has reached his two-term limit. He has endorsed Odinga for president after falling out with Ruto after the last election.

Kenyan election authorities have preceded with tallying cautiously, wary of the mistakes that caused the Supreme Court to nullify the results last time and order a re-run.

Media houses have filled the information gap by recruiting hundreds of people to manually input results from the images of results forms into spreadsheets.

Their tallies differ because results from polling stations were uploaded as they came in, and so each media group is counting at a different pace and not necessarily in the same order.

By 1200 GMT on Thursday, the privately-owned Nation group had tallied results from four-fifths of polling stations and put Odinga ahead with 50.40% of the vote and Ruto at 48.92%.

The winning candidate must get 50% of the vote plus one to win, and at least a quarter of votes in 24 out of Kenya’s 47 counties. If there is no outright winner, there will be a second round of voting without the two presidential candidates currently receiving fractions of a point.

According to a Reuters tally of 66 out of 291 constituency-level results forms at 1100 GMT, Odinga had 52.69% votes and Ruto had 46.65%. Six forms uploaded on the site did not have totals or were unreadable.

Former U.S. president Johnnie Carson, a board member of the National Democratic Institute, said that the process needed to be trustworthy more than it needed to be fast.

“The technology should not outpace the trust and integrity the citizens have in the process,” he said.

International observers were generally positive about the election, despite some last minute printing problems, changes to procedures and inconsistencies in posting results.

Many Kenyans, frustrated by the shifting alliances of the elites and fed up of rising prices and corruption, didn’t bother to vote at all.

The commission said about 65% of registered voters turned out for the legislative, local and presidential elections – a big drop from 2017 when voter participation was nearly 80%.

The elections have largely been peaceful so far; major protests and clashes usually only follow result announcements. More than 1,200 people were killed after the 2007 elections, and more than 100 after the 2017 polls.

Author and political commentator Nanjala Nyabola said the lack of violence should not be the standard for a success.

“People are just looking for the absence or presence of violence and as a Kenyan it’s a really demoralising standard to be told we should only aspire to the bare minimum,” she said. “We are trying to hold ourselves to a higher standard.”