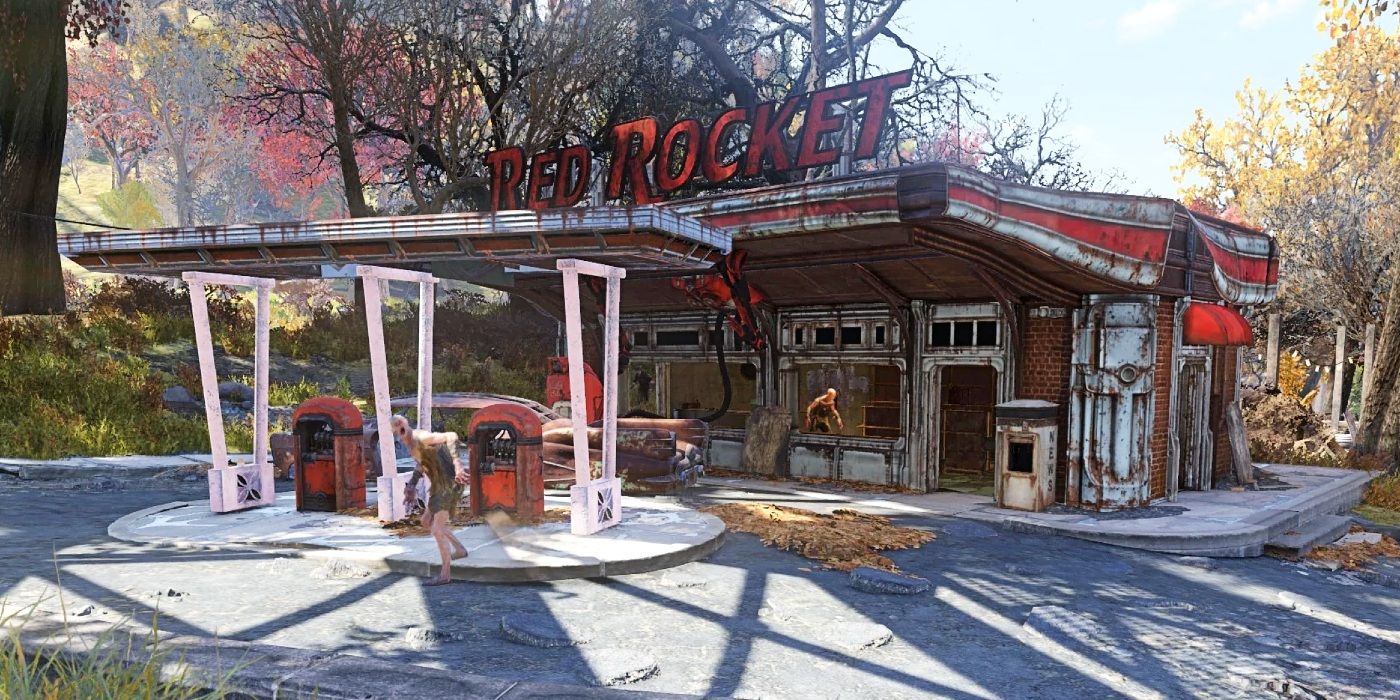 Prime Video’s Fallout TV show is set to include a major location from the video game source material, as revealed by new set photos. Based on the video games originally created by Interplay Entertainment and now developed by Bethesda, the upcoming post-apocalyptic series is created by Westworld creators Jonathan Nolan and Lisa Joy. The Fallout TV shows stars Walton Goggins, Moises Arias, Ella Purnell, Kyle MacLachlan, and Aaron Moten, among others, with filming getting underway on the project in July of last year. Captain Marvel‘s Geneva Robertson-Dworet and The Office‘s Graham Wagner officially joined Fallout as showrunners last January.

While many mysteries remain about the Fallout tv show, new set photos shared by J Carson on Twitter reveal that the series will feature a Red Rocket filling station, an important location from the video games.

Judging from the photos, the Red Rocket set is nearly completed, with workers featured in one of the images seeing to some finishing touches. In addition to the rundown filling station itself, the post-apocalyptic look of the location is completed with a number of rusted-out 1950s vehicles. Unfortunately, since the set isn’t yet completed, the photos don’t feature any actual filming taking place at the Red Rocket.

Many story details remain unknown regarding the Fallout tv show, but the inclusion of a Red Rocket filling station could provide a few hints about what’s in store for audiences when the show eventually does release on Prime Video. In the world of the Fallout games, prior to the nuclear war, Red Rocket was a chain of filling stations that supplied vehicles with gasoline, diesel, and, for nuclear-powered vehicles, fusion. Red Rocket filling stations serve as useful spots for players, providing a defensible location that can also be used to repair and customize various pieces of equipment. The filling station also sometimes make great places upon which to build a settlement.

The size and detail of the Red Rocket featured in the set photos suggest that it could end up being an important location in the show. It’s possible that the show’s heroes will use it as a settlement or base of sorts as they repair gear needed to survive in the harsh post-apocalyptic environment. While Red Rockets are scattered throughout the games, it’s unclear how prominently they will feature in the Fallout show and whether there will be multiple different ones in various locations. Interestingly, in Fallout 4, a Red Rocket filling station is one of the first places that the player explores and is where they encounter Dogmeat, a potential canine companion. While the show has been confirmed to not follow the story of the games and instead just take place in the same world, it’s possible that a Red Rocket will be a place where friendship can be found.

With filming having started last summer, season 1 of the Fallout show is likely now nearing completion. It was previously reported that the series will hit Prime Video in either 2023 or 2024 and, if it wraps filming in the next few months, it’s likely that it will release before the end of the year. Many questions remain about the actual story of the Fallout show, but all the set photos shared thus far have affirmed that, at the very least, it will stay very faithful to the art style and atmosphere of the games.

More: What Amazon’s Fallout TV Show Needs To Avoid From The Game