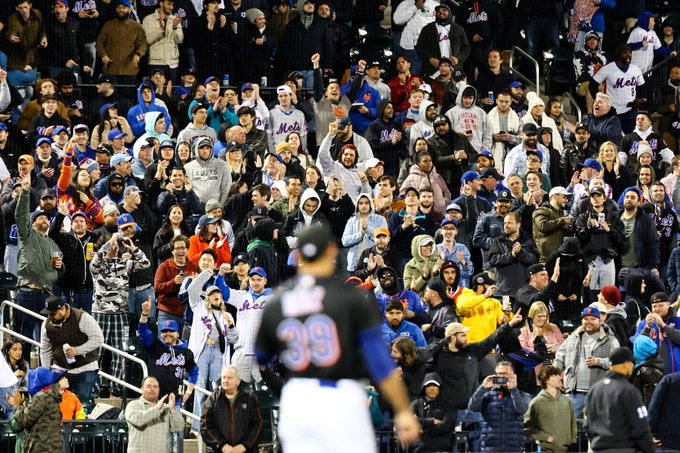 The 2022 Mets season didn’t end the way we want it to but we did have some fun along the way, right Mets fans? In the spirit of Thanksgiving, we here at Metsmerized want to focus on this gratitude and talk about the Mets game from this past season that we’re most grateful to have seen happen, whether in-person, on TV, or on the radio.

Wild Card Game 1 – During the Brodie Van Wagenen Error, I didn’t think I’d ever get the chance to attend a postseason game with my sons and dad. Yes, I know, the game was an unmitigated disaster. That said, I got to share a special moment with my family, and that is something I will always cherish.

Of course, this was one of the many terrific wins the Mets had last season. Potentially the best one. Rallying for seven runs in the ninth inning was priceless. Seeing how quiet the thinned out Philadelphia crowd, as a Philadelphian myself, made it all the much better. Certainly one I’ll never forget, especially being at. Though, I guess the Phillies ended up getting the last laugh. Regardless, a terrific night.

This game was the first time I was able to watch deGrom pitch live since 2019. I love a good pitchers duel, and deGrom vs. Aaron Nola is about as good as it gets. The Mets got a run in the first on a bloop hit from Alonso, and that was all either side would get. DeGrom wound up throwing six scoreless innings allowing just two hits and striking out 10 Phillies.

Seeing how the crowd gets behind deGrom firsthand as he racks up strikeouts is one of the best experiences as a Met fan.

Of all the special days and nights the Mets enjoyed in 2022, this one was way up there for me. On a hot, sun-kissed July day, Mets fans turned out in full force to absolutely pack out Citi Field in order to pay tribute to one of the best to have ever done it. Keith Hernandez.

In a tribute that was long overdue, owner Steve Cohen went above and beyond to ensure that one of the greatest players to ever pull on a Mets jersey was given the day he deserved. It was an emotional ceremony from start to finish and the sight of grown men crying, while wearing Hernandez jerseys, summed up just how much of a special day this was for the entire organization.

Hernandez will go down as one of the most important and significant players in franchise history, and the jersey retirement was the latest effort from Cohen to honor this team’s rich history and do right by those who gave blood, sweat and tears to the jersey. You couldn’t help but be overwhelmed by pride watching Hernandez give his speech with both his family and some Mets greats watching on, and it was perhaps the clearest reminder that these are different times now.

The Wilpons were gone and the team was now being run by a family that clearly cared, who were going to prove just how much they cared through actions with days like these. Oh, and to top off an incredibly emotional and memorable day, the current Mets beat the Marlins with a walk off in a fashion Hernandez would have been proud of. That was a special day to be a Mets fan.

The combined no-hitter has to be at the top of my list for 2022. I was only 11 when Johan Santana tossed the first Mets no-hitter, and don’t remember any of that game. Getting to watch the Mets throw a no-hitter as an adult, especially considering how much my fandom has grown, was really special.

For years I have wanted to see them do it again because I wanted to feel what it was like as an adult. It is similar to me to the World Series in 2015, and I was only 14 years old. Getting to witness moments as an adult when my fanhood is so much stronger is really special.

I know everyone else focused on real games, but I just had to bring up Old Timers Day. How great was it to finally the Mets doing one again?! Getting to see my childhood idol Mike Piazza play with some of my parents childhood idols, especially with my mom sitting next to me, is just something you couldn’t put a price on. Thanks Steve Cohen, for giving Mets fans like my and my mom a memory like that from this season.