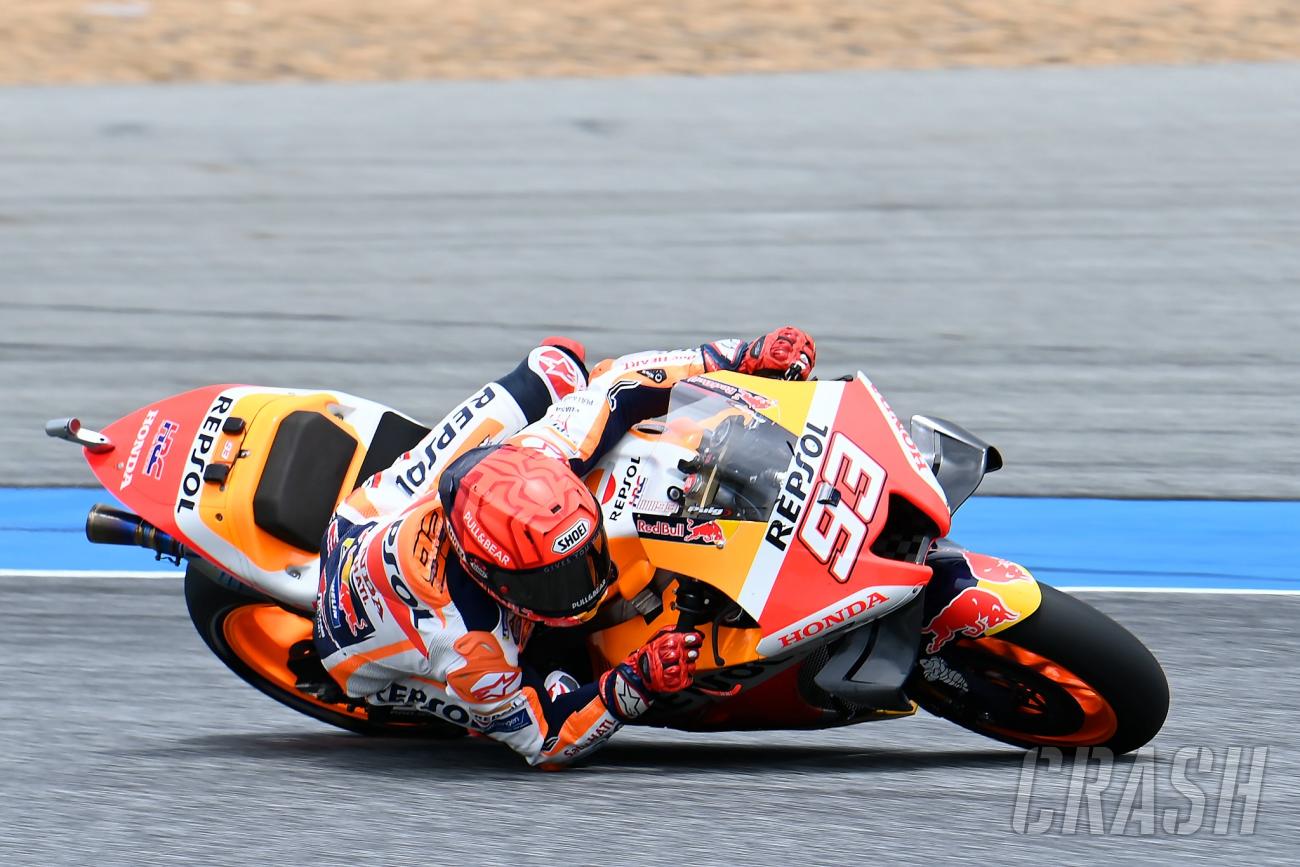 Updated with a quote from Danilo Petrucci after his first session on the Suzuki GSX-RR.

Marc Marquez began opening free practice for the 2022 Thailand MotoGP with a small fall but finished it on top of the Buriram timesheets.

The eight-time world champion, who took his first pole in three years at a wet Motegi last weekend, snatched the top spot from reigning title holder Fabio Quartararo during a frantic end to the session, which saw just 0.098s cover the top four riders.

After almost continuous rain for the last two days, courtesy of storm Noru, the sky brightened slightly on Friday morning.

A wet but drying track for Moto3 progressed to slick tyres during the Moto2 session, although some damp patches were still present as the premier class then took to the circuit for the first time since 2019.

Marc Marquez – winner of broth previous Thai Grands Prix – and Miguel Oliveira were caught out with falls early, Marquez running wide and losing the front of his RCV on the (probably damp) blue paint, before remounting and continuing without pitting.

Pramac Ducati’s Johann Zarco was leading Francesco Bagnaia and Quartararo as riders put in soft rear tyres for a late-time attack in case of further rain, which remains a threat for the rest of the weekend.

While Quartararo began the weekend strongly for both race pace and time attack, title rivals Francesco Bagnaia and Aleix Espargaro had a more complicated session.

Bagnaia had suddenly dropped from second to twelfth with two minutes to go, putting him in danger of missing a top ten place. The Italian then climbed back to sixth, only to be pushed down to 13th, before returning to sixth on his very final lap.

That nudged an impressive Cal Crutchlow to eleventh, while Aleix Espargaro was left 16th for Aprilia (but only +0.564s) and must also hope for further dry weather to try and break into the top ten by the end of FP3 and avoid a visit to Qualifying 1.

Danilo Petrucci: The Suzuki is such a nice bike

Danilo Petrucci, drafted in as a late substitute for the injured Joan Mir at Suzuki, completed his first MotoGP session since last year’s Valencia finale with a best lap time a creditable 2.183s from Marquez – putting him ahead of both Darryn Binder and Tetsuta Nagashima.

“I’m really happy that I’ve tried the Suzuki GSX-RR. I was so nervous because, you know, the bike is s different to anything I’ve been used to ride in the past, but it is such a nice bike that I enjoyed it very much,” Petrucci said.

“Really, I was not expecting that the bike was so good. For sure everything is really difficult because the other guys are going really really fast, and I still need to understand how to ride the bike and adapt my riding style to it, but I’m really happy and I didn’t expect to be so fast since the very beginning.”

The Japanese Grand Prix was also a race to forget for Aleix Espargaro, who has slipped 25 points from the top after technical issues forced a last-minute bike swap, leaving him 16th.

The last time MotoGP raced at Buriram, in 2019, Marc Marquez – on pole at Motegi last weekend – narrowly held off then rookie Quartararo to wrap up his eighth world title, with Maverick Vinales completing a podium covered by just 1.3s.

MotoGP welcomes back Danilo Petrucci this weekend. Fresh from finishing runner-up in the MotoAmerica Superbike championship, the double premier-class winner (with Ducati) is stepping in at Suzuki for the injured Joan Mir.

Petrucci won’t be the only substitute on track, with HRC test rider Tetsuta Nagashima, who crashed out of a MotoGP race debut last weekend at Motegi, called up in place of injured countryman Takaaki Nakagami at LCR Honda.

Wet weather is forecast throughout the Buriram event.

As with the other end of season ‘flyaways’, absent from the calendar since Covid restrictions in 2019, ten riders have no prior experience of racing in MotoGP at Buriram: Brad Binder, Alex Marquez, Jorge Martin, Enea Bastianini, Luca Marini, plus this year’s rookies Marco Bezzecchi, Fabio di Giannantonio, Darryn Binder, Remy Gardner and Raul Fernandez.