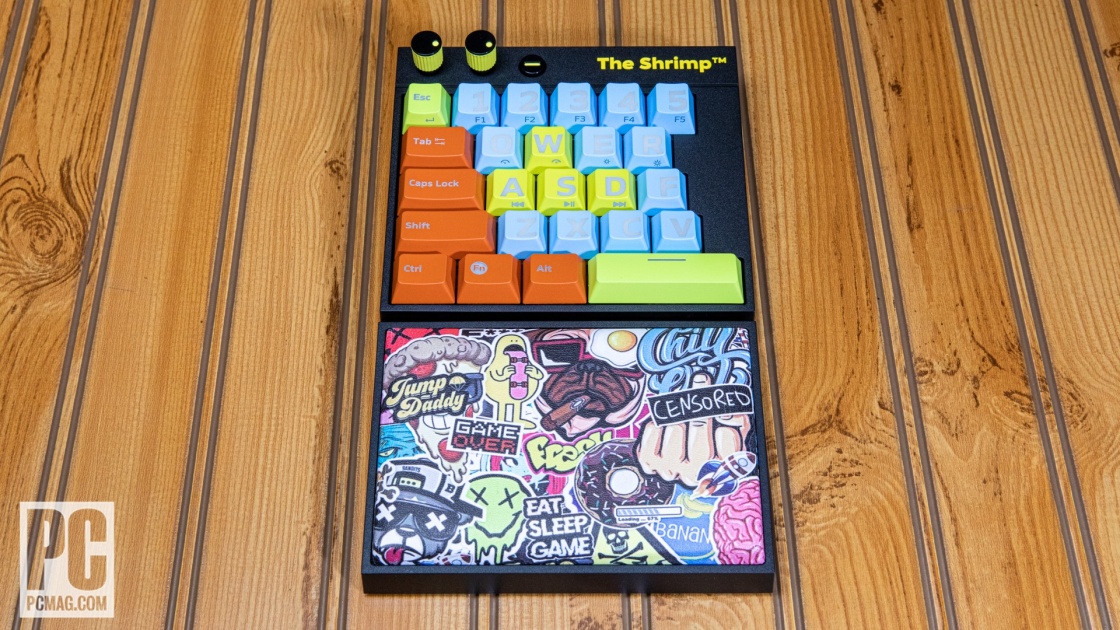 We live in a world of plentiful and inexpensive gaming keyboards, but discrete gaming keypads are a quirky set of rarities and one-offs. Some, like Razer’s Tartarus line, differentiate themselves from standard keyboards with ergonomically minded shapes to cradle your hand and extra buttons. Others, like Cooler Master’s ControlPad, try to streamline things to be as compact and customizable as possible.

The Shrimp ($79.99), a new gaming keypad from Danish gaming hardware distributor Nordic Game Supply, keeps things simple. It’s effectively a half-keyboard, with all the keys you’d find on the left side of a 60 percent design, from the “5” key over. Those 25 keys give you just enough to play most PC games in a fairly compact and very familiar package. With a couple of flourishes for convenience and style, The Shrimp feels like a solid option for players who, for whatever reason, want a separate set of keys just for games, but don’t want to buy, carry, or store a whole new keyboard.

A Shrimp Cocktail of Keys

Unlike other keypads, The Shrimp is simply a mini keyboard. Simultaneously compact and bulky, it’s a 1.69-by-4.91-by-5.41-inch plastic rectangle with 25 keys on it. You get every key you’d find on the left side of a regular keyboard, plus a half-size space bar. That gives you all the keys you’ll need to play competitive games like first-person shooters or action games that require rapid movement. With some creative in-game mapping, you can also get away with playing other kinds of games that spread themselves out across a standard keyboard, like RPGs, but you’ll find yourself struggling with MMOs and other genres that demand a full function row for hotkeys. (That said, you can always offload your hotkeys to your right hand with an MMO mouse.)

While The Shrimp stays true to classic keyboard form, small changes are evident in some elements. The keycaps feel slightly larger and wider than you find on larger keyboards, allowing your fingers to rest in the valleys of their concave surfaces. The caps also feature oversize labels and transparent sides, which both look fun and allow lots of RGB light to shine through.

Under the caps, you’ll find The Shrimp features Gateron G Pro Yellow switches. They’re linear, similar to “red”-style switches from Cherry and others, which offer very quick actuation, making them ideal for competitive gaming. Gateron Yellows require just a smidge more force than red-class switches; Gateron Reds require 45 grams of force to actuate, while Gateron Yellows require 50 grams. After testing dozens of keyboards with Red switches and a couple with Yellows, I can tell the difference between the two and actually prefer the weightier press, since it cuts down on mispresses. I expect most users, however, will not notice the difference unless they alternate between the two.

In addition to the keys, The Shrimp features two clickable dials and a volume mute button in the top-left corner. One dial is a classic volume control, while the other adjusts the style and brightness of your RGB lighting. These controls work fine, save for a single wonky implementation: Clicking the volume dial technically works as a Play/Pause button, but where most keyboard Play/Pause buttons work contextually on whatever app’s currently open, this button seems to work exclusively with Windows Media Player. A Play/Pause shortcut, Fn+S, works across apps, but using that is more cumbersome.

With most gaming keyboards, the issue might be easily solved by remapping the Play/Pause command using a configuration app. The Shrimp, however, is one of the few PC gaming peripherals that does not feature any software support. You can still map inputs in individual games, of course, but you cannot make universal changes. You also can’t make custom macros or create custom RGB lighting setups, nor can you choose colors on a key-by-key basis. For most players, this won’t make The Shrimp any less effective than any other keyboard, but it’s definitely a bummer for tinkerers and power users who have more specific needs. Nordic Gaming Supply is looking into making a companion app for The Shrimp, according to a company spokesperson, but I wouldn’t buy one if you’re counting on expanded functionality later.

The Shrimp also comes with a big, blocky wrist rest to match its big, blocky base. It’s very firm, but padded enough to feel comfortable laying your arm on it for extended periods of time. That firmness ensures that your wrist lines up perfectly with the keys, minimizing wrist movement. Given the size and number of keys, you rarely have to make more than very slight lateral wrist movements as you play, making the pad/rest combination a strong ergonomic choice. With the rest, The Shrimp’s depth expands to a longer but still-compact 8.84 inches, so you can nonetheless move it around easily on your desk to whatever tilted position feels right.

Verdict: A Keypad Just for Fun

For better and for worse, The Shrimp stands an ocean apart from the gaming-peripheral mainstream. On the one hand, a 25-key mini keyboard that’s just for games is a neat idea. Its look and feel, while perfectly tame, are cool and unconventional. At the same time, the lack of configuration software, which cuts off standard features like remapping and lighting customization, makes the keypad feel a bit half-baked. None of its issues is truly disqualifying—most players will happily get by with macros and per-key lighting control—so we’d argue that the good outweighs the bad.

At $79.99, The Shrimp costs slightly less than the top-of-the-line Razer Tartarus Pro and the Cooler Master ControlPad. It’s also an inexpensive option compared with the best gaming keyboards we’ve tested. Then again, you will still need a keyboard for everything other than games, so that isn’t exactly a fair comparison.

Ultimately, this pad’s for laptop owners who want a better keyboard solution just for games—players who travel a lot may find the smaller footprint of The Shrimp comes in handy. We could also see it fitting in nicely for a worker who cannot or would prefer not to use a mechanical keyboard during office hours, but wants something more comfortable when playing games at home. If you’re looking to game on mechanical keys, but don’t want a full keyboard, The Shrimp is worth a nibble.

Sign up for Lab Report to get the latest reviews and top product advice delivered right to your inbox.

This newsletter may contain advertising, deals, or affiliate links. Subscribing to a newsletter indicates your consent to our Terms of Use and Privacy Policy. You may unsubscribe from the newsletters at any time.