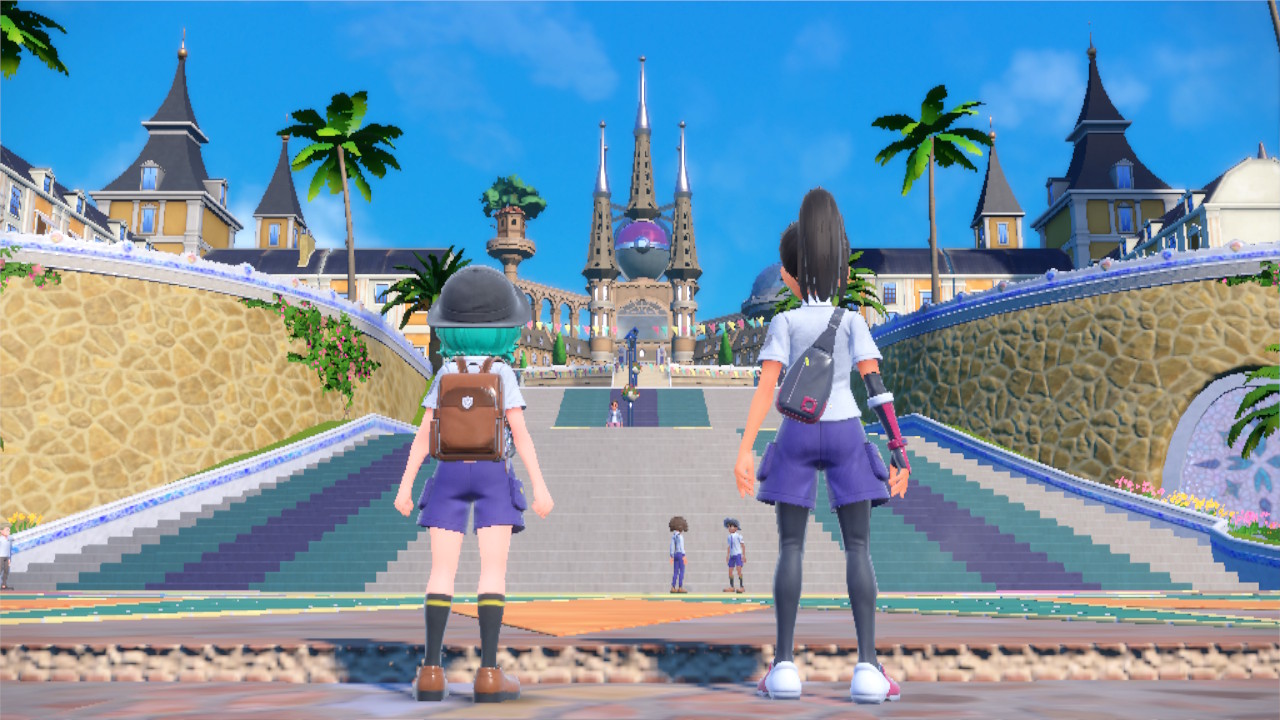 Pokemon Scarlet and Violet mark the series’ ninth mainline instalments, with the titles receiving widespread praise for the new open-world gameplay and freedom of exploration. However, discussions surrounding the game, outlined further in our Pokemon Scarlet and Violet review roundup, have also largely focused on the abundance of technical issues, bugs, and framerate drops that have held the games from being standout in every respect.

Technical performance specialists Digital Foundry has taken a deeper dive into the game, providing an in-depth analysis of many of Pokemon Violet’s visual and technical setbacks. Whilst this breakdown did focus on Pokemon Violet, it’s mentioned that, ‘all the technical details should apply equally to Scarlet as well.’

The analysis began by touching on the poor visual design and asset quality presented in Pokemon Violet. The world design is described as bland, scattered with environmental assets which utilise basic geometry and crudely placed textures. This is especially present on ground and wall textures painted with low-resolution 2D artwork, making for an overall ‘ugly’ and ‘cheap’ look to the world, according to Digital Foundry.

The use of scrolling images for cutscene cutaways as opposed to pre-encoded video, and inappropriate depth of field effect usage contributes to this ‘cheap’ and ‘unpolished’ feel, and Digital Foundry deems it particularly annoying as a lot of time is spent navigating through these text-based events.

The issues of draw distances are also addressed, as one of the game’s major bugs sees random pop-ins of Pokemon and other NPCs at relatively close distances to the player, with entities effectively despawning as soon as the player moves forwards and backwards. NPCs can also clearly be seen animating at reduced frame rates at typically reasonable distances from the player, which Digital Foundry noticed at anywhere between one-quarter rate and one-fifteenth of their intended rate in regular gameplay. Digital Foundry concluded that this was taking place in order to lower CPU demands.

The game also suffers constant frame rate dips and stutters, running on a dynamic resolution of 720p-1080p in the Nintendo Switch’s docked mode, and 576p-720p in portable mode. Image quality is ‘questionable’ in docked mode, with the combination of long lines of sight with zero anti-aliasing and limited post-processing making pixel crawl ‘very obvious.’ Portable play is said to fare a little better, but is not especially clean particularly when the resolution dips.

The analysis did mention a few things that work well for Pokemon Violet, mentioning that some of the smaller-scale inward environments included decently detailed assets and were a ‘visual highlight’ of the game. Character designs were also described as ‘attractive’ and ‘unique’, particularly for NPCs pivotal to the main narrative. It’s also briefly mentioned that substantial open zones, towns and settlements are all presented without loading screens or visual barriers, which is a step up from Pokemon Legends: Arceus, which included more ‘limited open world spaces.’

When measured against Pokemon Legends: Arceus and Nintendo Switch launch title The Legend of Zelda: Breath of the Wild, Pokemon Scarlet and Violet is described to look ‘laughably simple’ by comparison. Pokemon Legends: Arceus presents a much more cohesive visual aesthetic and sees shadows and NPCs draw in at a much greater distance, running at good animation rates. Environmental assets are also more detailed with higher-quality textures.

It’s been stated that Pokemon Scarlet and Violet may be too ambitious of a title for the hardware it’s running on – Digital Foundry describes the Nintendo Switch as a relatively weak system paired with a low bandwidth pool of memory. But compared to Nintendo Switch gameplay capture of titles with larger and denser open-world environments, such as Dying Light and Xenoblade Chronicles 3, we can see that the hardware is capable of some impressive feats when paired with advanced game engines.

When weighing up all the technical issues and bugs presented in Pokemon Scarlet and Violet, Digital Foundry concluded the title sits ‘well below the technical standards’, stating:

‘Game Freak’s proprietary tech is due for an overhaul, if not an outright replacement especially when it comes to more ambitious and open titles’

You can watch the full tech breakdown of Pokemon Scarlet and Violet on Digital Foundry’s YouTube channel.