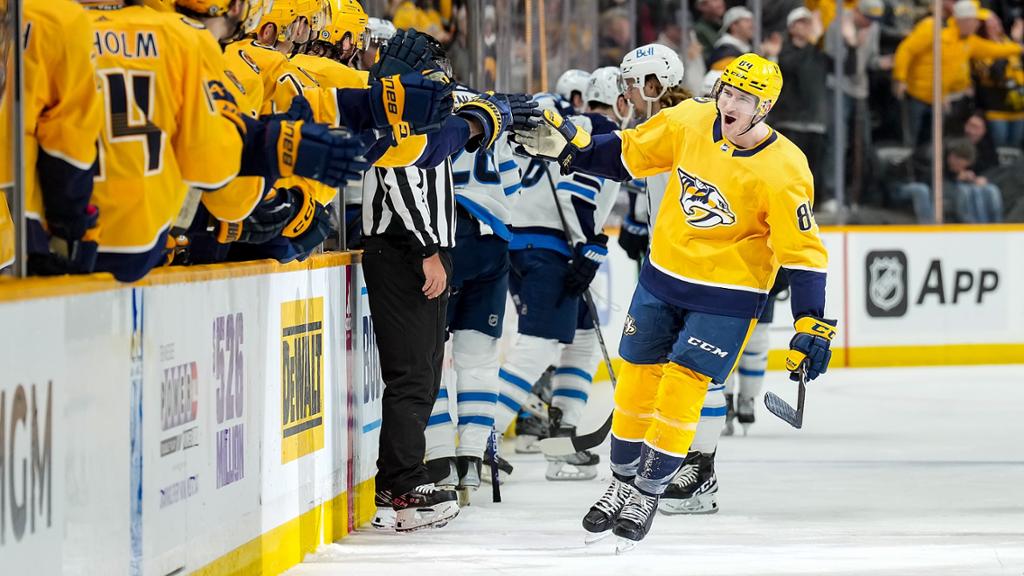 The Nashville Predators took down one of the best in the West with a 2-1 defeat of the second-place Winnipeg Jets Tuesday at Bridgestone Arena.

Cody Glass and Tanner Jeannot scored for the Preds, who have won four of their last five games and their last four at home.

The Jets jumped out to a 1-0 lead just 29 seconds into the first period when Pierre-Luc Dubois sent home a feed from Cole Perfetti from the side of the crease. The Predators generated several offensive-zone chances of their own in the first frame but were unable to get one past Connor Hellebuyck through the first 20-plus minutes of play.

Nashville finally got on the board at 13:49 of the second frame, when Glass tipped in Roman Josi‘s shot from the point to tie the game at 1-1. The score remained knotted up until Jeannot got the puck behind the net and stuffed it in for a wraparound goal at 5:38 of the third period to make it 2-1.

The Preds played a man down for the final 40 minutes of the game after defenseman Alexandre Carrier left after the first period with an upper-body injury sustained during a fight with Winnipeg forward Logan Stanley after Stanley laid a hit on Glass.

A Winnipeg native, Glass led Nashville with seven shots on goal in the win. With his second-period equalizer, he now has 14 points (5g-9a) in his last 21 games. Glass has already established career highs in both assists (11) and points (17) this season.

Jeannot found the back of the net in the third period for the eventual game winner. It was his fourth goal of the season and his first since Oct. 27 vs. St. Louis.

“You don’t want it to be a one-off, I think that’s important for our group. That meeting was really good and we played a really big game [on Saturday], but it’s important to follow that up. We’ve got to get some momentum here. We’ve got to get some points. And I thought it was another really good game, but we’ve got one more before the break. It’s another great team that’s coming in here and it’s got to be our standard now.”

Jeannot on his game-winning goal:

“It feels really good, a little bit of a weight lifted off the shoulders. But my focus has been the same going into every game, just do everything I can to help the team win. And if I can do that in ways other than scoring I do my best with that as well, but it’s always nice to get on the board and hopefully we can keep it going.”

Glass on how it felt to have Carrier stick up for him by fighting Stanley:

“Not good first of all, because I don’t want [Carrier] to fight for me, especially against a guy who’s 6-foot-7′. I owe him a dinner or new shoes or something. That’s the kind of character Carrsy is. He’s a great dude and to fight someone that much bigger than him and have my back is something I’ll never forget. And that’s just kind of the character we have on this team and something I really appreciate.”

“I think it’s very similar to [Cole Smith]. Night in and night out, he fights for the team. He’s a big time penalty killer. He plays hard minutes. He’s a great teammate, plays the game the right way he plays with effort. He does a lot of things that don’t show up on the score sheet. I think the guys were really, really happy for him because when you have guys that go to battle for you and do a lot of a lot of little things like I said, night in and night out, they play hard minutes. Sometimes they don’t get a lot of minutes. They practice hard to be great teammates, they stick up for each other. When you’re part of a team, those are things that the guys on the team in the room really value. When guys sacrifice themselves the way that Tanner does and the way Smitty does, I think that’s why you get the reception that you get from the group.”

Hynes on the win:

“I think it’s really good back-to-back games for us and a pretty thorough team effort. That’s something that we have talked a lot about – consistency. We played the last two games the way that I think our team is capable of playing and it’s nice to see what our group looks like when we’re playing the game the right way. We’ve got another big one coming up. I think it’s important for us to be able to stay with it. We’re in a position where we’re continuing to fight for wins and move up in the standings. I think if we continue to build on what we built the last two games with ourselves, we have a really good chance on Thursday.”

The Predators will host the New Jersey Devils Thursday at Bridgestone Arena for their final game before the NHL All-Star Break. The puck drops at 7 p.m. CT, and the game will be broadcast on Bally Sports South, 102.5 The Game and El Jefe Radio.