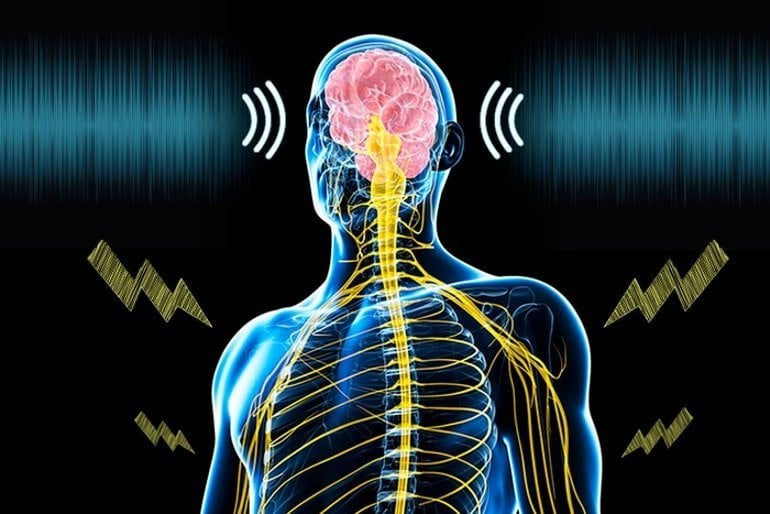 Summary: Combining electrical stimulation with sounds that activate the somatosensory cortex could help bring relief to those suffering from chronic pain and other neurological conditions.

A University of Minnesota Twin Cities-led team has found that electrical stimulation of the body combined with sound activates the brain’s somatosensory or “tactile” cortex, increasing the potential for using the technique to treat chronic pain and other sensory disorders.

The researchers tested the non-invasive technique on animals and are planning clinical trials on humans in the near future.

The paper is published in the Journal of Neural Engineering, a highly regarded, peer-reviewed scientific journal for the interdisciplinary field of neural engineering.

During the experiments, the researchers played broadband sound while electrically stimulating different parts of the body in guinea pigs. They found that the combination of the two activated neurons in the brain’s somatosensory cortex, which is responsible for touch and pain sensations throughout the body.

While the researchers used needle stimulation in their experiments, one could achieve similar results using electrical stimulation devices, such as transcutaneous electrical nerve stimulation (TENS) units, which are widely available for anyone to buy at pharmacies and stores. The researchers hope that their findings will lead to a treatment for chronic pain that’s safer and more accessible than drug approaches.

“Chronic pain is a huge issue for a lot of people, and for most, it’s not sufficiently treatable,” said Cory Gloeckner, lead author on the paper, a 2017 Ph.D. alumnus of the University of Minnesota Twin Cities Department of Biomedical Engineering, and an assistant professor at John Carroll University.

“Right now, one of the ways that we try to treat pain is opioids, and we all know that doesn’t work out well for many people. This, on the other hand, is a non-invasive, simple application. It’s not some expensive medical device that you have to buy in order to treat your pain. It’s something that we think would be available to pretty much anyone because of its low cost and simplicity.”

The researchers plan to continue investigating this “multimodal” approach to treating different neurological conditions, potentially integrating music therapy in the future to see how they can further modify the somatosensory cortex.

“A lot of people have been using acupuncture or electrical stimulation—non-invasive or invasive—to try to alter brain activity for pain,” said Hubert Lim, senior author on the paper and a professor in the University of Minnesota Twin Cities Department of Biomedical Engineering and Department of Otolaryngology. “Our research shows that when you combine this with sound, the brain lights up even more.”

Lim said this opens up a whole new field of using this bimodal and multimodal stimulation for treating diseases.

“It’s odd to think about using sound to treat pain, but if you think about what institutes like the University of Minnesota’s Center for Spirituality and Healing or the NIH’s National Center for Complementary and Integrative Health are doing, they’re looking at music therapy and combining other modalities with the traditional methods to be able to enhance healing of these types of conditions,” Lim said. “This research gives us a new, structured framework for doing that moving forward.”

About this pain and neurotech research news

Topographic and widespread auditory modulation of the somatosensory cortex: potential for bimodal sound and body stimulation for pain treatment

Objective. There has been growing interest in understanding multisensory integration in the cortex through activation of multiple sensory and motor pathways to treat brain disorders, such as tinnitus or essential tremors. For tinnitus, previous studies show that combined sound and body stimulation can modulate the auditory pathway and lead to significant improvements in tinnitus symptoms. Considering that tinnitus is a type of chronic auditory pain, bimodal stimulation could potentially alter activity in the somatosensory pathway relevant for treating chronic pain. As an initial step towards that goal, we mapped and characterized neuromodulation effects in the somatosensory cortex (SC) in response to sound and/or electrical stimulation of the body.

Approach. We first mapped the topographic organization of activity across the SC of ketamine-anesthetized guinea pigs through electrical stimulation of different body locations using subcutaneous needle electrodes or with broadband acoustic stimulation. We then characterized how neural activity in different parts of the SC could be facilitated or suppressed with bimodal stimulation.

Main results. The topography in the SC of guinea pigs in response to electrical stimulation of the body aligns consistently to that shown in previous rodent studies. Interestingly, auditory broadband noise stimulation primarily excited SC areas that typically respond to stimulation of lower body locations. Although there was only a small subset of SC locations that were excited by acoustic stimulation alone, all SC recording sites could be altered (facilitated or suppressed) with bimodal stimulation. Furthermore, specific regions of the SC could be modulated by stimulating an appropriate body region combined with broadband noise.

Significance. These findings show that bimodal stimulation can excite or modulate firing across a widespread yet targeted population of SC neurons. This approach may provide a non-invasive method for altering or disrupting abnormal firing patterns within certain parts of the SC for chronic pain treatment.