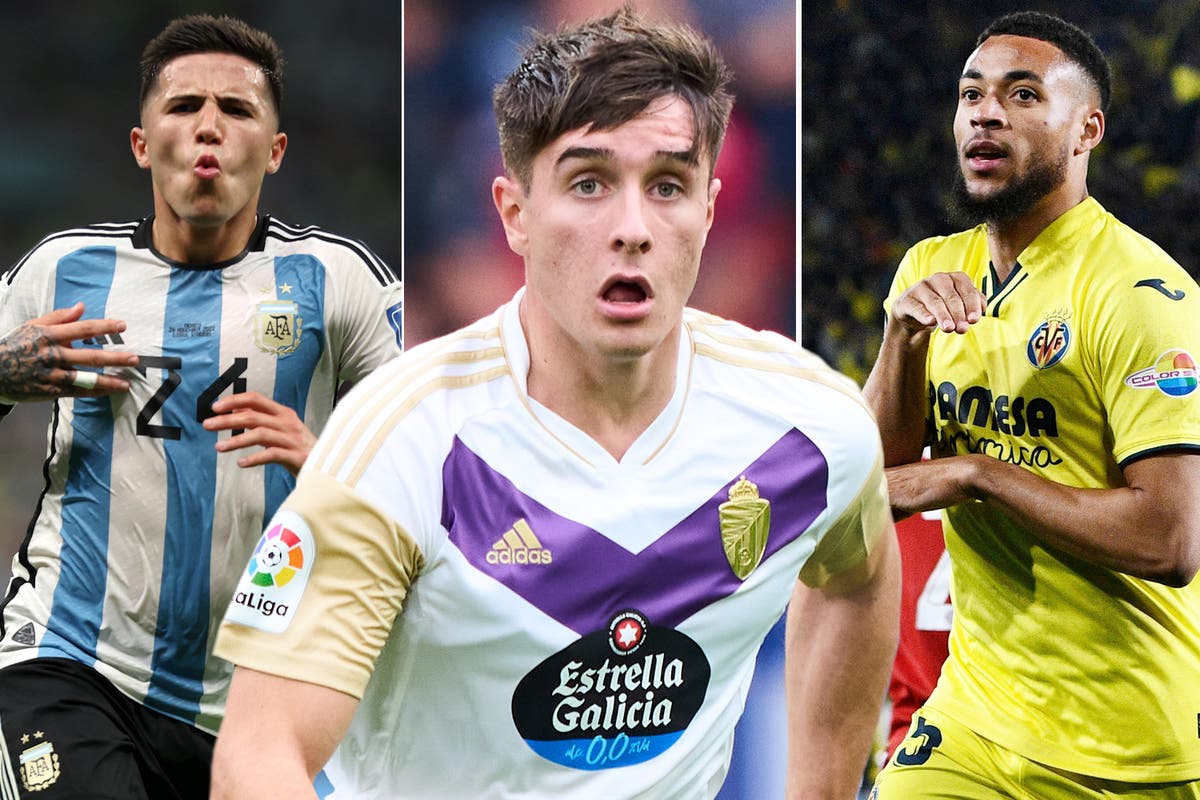 Arsenal, Chelsea and Tottenham are working hard to wrap up late deals as the January transfer window nears its deadline. Despite leading the Premier League, the Gunners have already snapped two players in the form of Leandro Trossard and Jakub Kiwior and still want Ivan Fresneda and Chelsea target Moises Caicedo.

The Brighton midfielder has already been the subject of a £55m offer from Chelsea, who have again failed in a fresh push to sign Argentina star Enzo Fernandez amid reports of an £87m offer from Stamford Bridge. The Blues are also ready to launch another bid for Anthony Gordon after failing to sign him in the summer.

Over at Tottenham, Arnaut Danjuma is set to join on loan after hijacking Everton’s agreed deal and a fresh round of talks over the potential signing of top target Pedro Porro are planned for this week amid interest from Chelsea, while links with Nicolo Zaniolo continue to bubble along. Follow all of the latest transfer news, gossip and rumours below!

Chelsea’s second bid for Malo Gusto will be between £30-35million and is likely to be accepted by Lyon, reports L’Equipe.

The player, is was also of interest to Manchester United, “absolutely wants to join Chelsea” before the window closes next week and has already agreed terms on a six-and-a-half-year deal.

Discussions with Lyon are ongoing, with the Ligue 1 club hoping to keep the player on loan for the rest of the season.

Chelsea are reluctant to allow Hakim Ziyech to join Newcastle on loan.

The Morocco international is open to leaving Stamford Bridge this month and Newcastle have looked at the possibility of signing him to boost their Champions League bid.

But Chelsea are increasingly seeing Newcastle as a rival following their resurgence since they were taken over by Saudi Arabia’s Public Investment Fund.

Chelsea co-owners Todd Boehly and Behdad Eghbali have personal friendships with members of the Newcastle board and their position on Ziyech has been relayed.

Fulham are open to renewing Willian’s contract to keep him at Craven Cottage beyond this season, writes Nizaar Kinsella.

The 34-year-old Brazilian has less than six months left on his deal but increasingly regards west London as home and wants to extend his deal by an extra year.

Willian joined Fulham on a free transfer last summer and has been a key player in their brilliant start to the season under Marco Silva. He has three goals and two assists in 14 Premier League appearances.

Fulham have indicated they are willing to give Willian a contract extension but talks will not start until the transfer window has closed, as the club prioritise new signings to strengthen their squad.

Liverpool have been tipped to make a move for Sofyan Amrabat in the summer.

Calcio Mercato report that the Reds are keen to sign the Morocco midfielder, but Fiorentina are refusing to entertain a sale during January.

Amrabat would command a fee of around £35million, which Liverpool would be unwilling to part with this month but would be front of the queue come the end of the season.

No bids yet for Fresneda

Real Valladolid are yet to receive a bid for Arsenal and Borussia Dortmund target Ivan Fresneda, the club have confirmed.

Reports in Spain claim BVB are closing in on the deal, but it situation now appears wide open.

“(Fresneda) has aroused the interest of many teams, but we have not received an official offer,” Real Valladolid sporting director Fran Sanchez told Diario AS.

“It is true that several clubs have contacted us and that interest of many clubs is real, but there is no official offer.

“We are not desperately trying to sell the player.”

Hijacking transfers in the theme of this window as West Ham are now monitoring Leicester’s interest in Tete.

The 22-year-old is currently on loan at Lyon from Shakhtar, and has six goals in 17 appearances this season.

Shakhtar are ready to cash in on the player, with Lyon able to turn their agreement into a permanent deal for £17.5m.

Lyon would have to be persuaded to let go of their loanee this month in order for him to join another club.

Tottenham will again push to sign Pedro Porro with fresh talks today, and could offer Sporting players in exchange, according to Fabrizio Romano.

“Tottenham will push again for Pedro Porro – they are ready to offer players to Sporting Lisbon, but they only want money,” he told CaughtOffside.

“A swap deal won’t be easy, but Spurs remain optimistic and will push again for this deal in the next 24 hours.”

Chelsea have already spent close to £200million this month, but still want four more deals through the door before next week’s deadline.

It’s been a bumper window already and looks likely to get even busier at Stamford Bridge and Cobham. Just under seven days to go!

Leeds are confident of winning the race to sign Juventus midfielder Weston McKennie, according to Gianluca Di Marzio.

The Italian transfer guru claims McKennie, who has been linked with both Tottenham and Arsenal, has agreed personal terms with Leeds and now the club will look to settle on a fee.

Chelsea and Newcastle are battling to sign Everton’s Anthony Gordon before the end of the transfer window, report the BBC.

Both clubs, and Tottenham, failed in bids for the 21-year-old last summer as the Toffees held firm over their £60million valuation, but there is confidence a deal can now be reached.

Everton need cash as they look to hire a new manager, but will not be able to demand £60m. Chelsea could loan Gordon back to Everton for the remainder of the season.