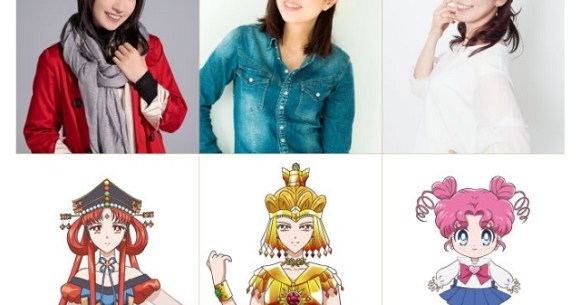 One is making her Sailor Moon debut, and the other is returning to the franchise for the first time in almost 30 years, but in a new role.

The anticipation for the upcoming Sailor Moon Cosmos anime movie got kicked up a notch last week with the release of a new trailer that gave us our first look at the Sailor Starlights. But as fans know, the Starlights aren’t the only key characters in Sailor Moon’s fifth and final story arc that’s being re-adapted as Cosmos, and some incredibly important figures will be voiced by tremendously talented and famous voice actresses.

Cosmos’ producers have announced that legendary voice actress Megumi Hayashibara will be playing none other than Sailor Galaxia, interstellar conqueror and the last great foe faced by Sailor Moon and her Sailor Senshi friends. Hayashibara, whose extensive, decades-spanning list of credits includes Evangelion’s Rei, Ranma 1/2’s female Ranma, and Slayers’ Lina, has actually been part of the Sailor Moon anime franchise before, voicing astronaut Himeko Nayotake, an anime-original character created for the 1994 Sailor Moon S movie.

This will be her first time portraying a character from the series’ manga source material, though, and also a rare case of Hayashibara, who’s most commonly cast to play brassy, boisterous heroines, lending her voice to an antagonist, but she sounds more than up to the challenge. “I feel deeply honored to be Sailor Moon’s final oppenent,” Hayashibara commented. “[Galaxia] has her own sense of justice. On the other side of her obsession with acquiring strength and power are her feelings of loneliness and emptiness. She’s trying to carve out the kind of happiness she longs for deep down inside.”

Hayashibara isn’t the only big-name voice actress joining the Cosmos cast. The role of Princess Kakyu, a tragic victim of Galaxia’s aggression, is going to Nana Mizuki, a titan of the industry not just for her voice acting abilities, but for her singing and concert performances as well.

▼ The currently newest trailer for Sailor Moon Cosmos, released prior to the latest casting announcements

Finally, the mysterious Chibi Chibi will be played by…Kotono Mitsuishi. This one isn’t much of a surprise, seeing as how Mitsuishi has been reprising her role as Usagi/Sailor Moon for the entirety of the anime reboot that began with Sailor Moon Crystal back in 2014. Since Mitsuishi also played Chibi Chibi in Sailor Moon Sailor Stars, the arc of the 1990s Sailor Moon anime that Sailor Moon Cosmos is covering, it was pretty much a foregone conclusion that Kotono would be voicing Chibi Chibi once again, but the announcement makes it official.

It’s not clear whether Galaxia, Kakyu, and Chibi Chibi will appear in the first or second part of Sailor Moon Cosmos, but with the first opening in Japanese theaters on June 9 and the second on June 30, the wait won’t be all that long either way.