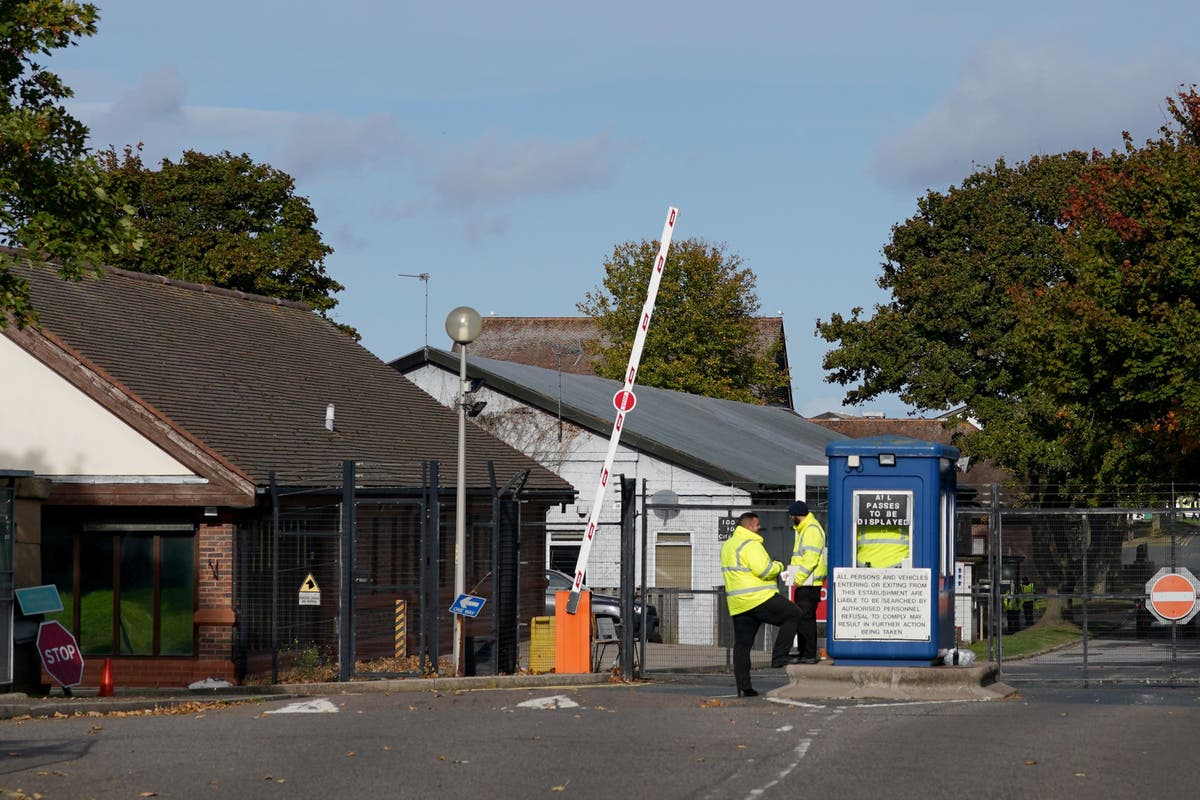 Get our free Inside Politics email

The asylum and immigration system needs a “complete overhaul” charities have warned, adding that the structure is in “serious peril.”

Amnesty Internationa called for the provision of safe routes for people seeking to come to Britain, faster processing of claims and an end to the plan to send migrants to Rwanda.

The organisation’s refugee and migrant rights director, Steve Valdez-Symonds, said: “On the anniversary of the tragic mass drownings in the Channel, these figures show the UK’s system for processing asylum claims remains in complete disarray.

Asked when the government would get control of the borders back, the prime minister’s official spokesman acknowledged the system was “broken”.

“The prime minister has emphasised that this is a priority of which he is spending a substantial amount of his time,” the spokesman told reporters.

“He has been clear that he wants to further grip the issue, particularly of illegal immigration, which is the main source of the fact that, whilst we have such substantive numbers making these routes, we cannot truly have control over those numbers that come in every day.”

There had been “some progress” after talks with France’s Emmanuel Macron but “there is much more to do in this area”.

The UK and other countries also faced “global migrations across Europe at the moment caused by the war” in Ukraine and “some unusual patterns following the end of the global pandemic”, the spokesman added.

Amnesty International called for a “complete overhaul” of the asylum and immigration system, providing safe routes for people seeking to come to Britain, faster processing of claims and an end to the plan to send migrants to Rwanda.

The organisation’s refugee and migrant rights director, Steve Valdez-Symonds, said: “On the anniversary of the tragic mass drownings in the Channel, these figures show the UK’s system for processing asylum claims remains in complete disarray.

“The totally unacceptable asylum backlog is the inevitable result of government policy that has expended huge resources and money on the disastrous Rwanda deal and other damaging distractions from the main job at hand – simply dealing with people’s claims as fairly and efficiently as possible.”

Downing Street insisted Rishi Sunak wants to bring overall immigration levels down after net migration to the UK climbed to a record half a million.

“The prime minister is fully committed to bringing overall numbers down,” the spokesman said.

“There are some unprecedented and unique circumstances which are having a significant impact on these statistics.

“The prime minister has said he wants net migration to reduce, he has not put a specific timeframe on that.”

“The new migration statistics today tell two stories about immigration to the UK. On the one hand, higher net migration is driven in large part by rising student numbers and the new Ukraine humanitarian routes – reflecting the generosity of the British public in opening their homes in exceptional numbers to welcome Ukrainians escaping the Russian invasion.

“On the other hand, the figures also show an asylum system in serious peril, with the backlog of claims growing further. Urgent action is needed to tackle the backlog and to work with local authorities to find suitable accommodation for asylum applicants.

“Today also marks one year on from the tragic deaths of 32 people in the Channel. With numbers of small boats crossing the Channel continuing to rise, the government must work closely with France and the EU to stop the dangerous crossings and provide safe and legal alternatives.”

The migration system is in ‘crisis,’ charities warn

Steve Crawshaw, director of policy and advocacy at Freedom from Torture, said: “Today’s immigration statistics paint a picture of a system in crisis – insufficient decisions being made, a bigger backlog and more refugees held in limbo. This government has run the asylum system into the ground and is using their failure to justify more and more extreme policies.

“A year on from the disaster that claimed 32 lives in the Channel, this government’s abrogation of responsibility for those seeking safety in this country is unconscionable. The government must end their deliberate neglect of the asylum system, repeal their and urgently expand safe routes to prevent further tragedies.”

“Waiting in limbo for a decision is catastrophic for the mental health of people seeking asylum, who must live in poverty and isolation.

“It’s time ministers stopped blowing taxpayers money on cruel and ineffective deterrence policies such as its awful deal with Rwanda and fix the asylum system they’ve broken.“And the Government must give people the right to work – which would improve the wellbeing of people in the system, allow businesses to hire staff, and save the taxpayer £330 million a year.”

“Despite their promises to stop dangerous Channel crossings, they’ve failed to tackle the criminal gangs, and asylum decision making has collapsed – with only 2 per cent of people who arrived in small boats over the last year having had their cases decided,” Ms Cooper said.

“Work visas have also substantially increased as a result of major skills shortages in the UK – yet the Conservatives are not taking any serious action to address skills shortages here at home.”

The British Red Cross issued an appeal for ministers to accelerate the processing of asylum claims after today’s figures showed a 74 per cent increase in the backlog to more than 120,000.

Of those, 117,400 had received no initial decision, including 79,314 who had been waiting for more than six months.

The British Red Cross said the Home Office should speed up handling of cases from five countries – Syria, Afghanistan, Iran, Eritrea and Sudan – where asylum is granted in the vast majority of cases. The 39,408 nationals of these countries make up one-third of the total backlog.

The charity’s Jon Featonby said priority should also be given to those who have been waiting longest, in some cases more than two years.

“The backlog in asylum decisions is increasing at an alarming rate,” said Mr Featonby. “This means more men, women and children are waiting for years for a response to their asylum claim.

“The longer people wait for an asylum decision the longer they are living in unsuitable accommodation without certainty – no work, no permanent place to live and no way to start the process of reuniting with family members. This is having a devastating impact on people’s mental and physical health.

“The people that we support here in the UK have already experienced unimaginable suffering. They have been forced to flee their homes and they need stability, security and to feel safe.

“Urgent steps are needed to address the backlog in asylum decisions, so people are not forced to live in limbo.

Rishi Sunak is under intense pressure from Tory MPs over a huge leap in net migration, which has climbed to a record half a million, according to official figures.

Unsurprisingly, Downing Street is keen to leap on the conclusion of the Office for National Statistics that “unprecedented world events” lie behind the sudden increase.

The prime minister’s spokesman said they “naturally reflect” the UK’s decision to open its doors to large numbers of refugees from Ukraine, Hong Kong and Afghanistan.

He said Mr Sunak “is fully committed to bringing overall numbers down”. However, asked when that will happen, he added: “He has not put a specific timeframe on that.”

The answer may not be good enough for Conservatives worried that rising immigration – and the small boats crisis in the Channel – are an opening for Nigel Farage to prise away Tory voters at the next general election.

Commenting on the quarterly immigration statistics released this morning by the government, Enver Solomon, CEO of the Refugee Council, said:

“These statistics underline yet again the government’s neglect and mismanagement of the asylum system due to a failure to invest in creating an orderly, efficient and effective system.

“The number of men, women and children now living in limbo has risen by 20,000 in just three months, meaning 143,000 are now waiting for an initial decision on their case with just under 98,000 waiting more than six months.

“Given the number of asylum applications which are agreed is at its highest level for 32 years – reflecting the global refugee crisis with millions of people fleeing their homes because of war, conflict and persecution – these new Home Office statistics underline why urgent action from government is so important.

“Ministers must set up a dedicated and well-resourced task force to improve the processing of asylum claims, both to reduce the human misery caused by the long delay for a decision but also the spiralling costs of accommodating those on the waiting list, which has reached more than £2bn a year.

“We at the Refugee Council stand ready to work with ministers and others to address this crisis: without further steps to build on those taken so far by the Home Secretary, this issue will continue to seriously harm the asylum system into 2023.”

British support for immigration ‘high as it’s ever been,’ think tank says

Sunder Katwala, director of think tank British Future, said: “Despite these exceptionally high numbers, inflated by new arrivals from Ukraine and Hong Kong, our research finds public support for immigration as high as it’s ever been.

“Neither Rishi Sunak nor Keir Starmer plans to make significant cuts to immigration because of the social and economic benefits it brings to Britain.

“So political leaders should now be setting out a vision for how we make this work well for all of us in the UK, focusing on integration, citizenship and training up the UK workforce to fill skills gaps.

“Making vague promises to reduce numbers, without any plan or policy to make it happen, will only damage public trust.”