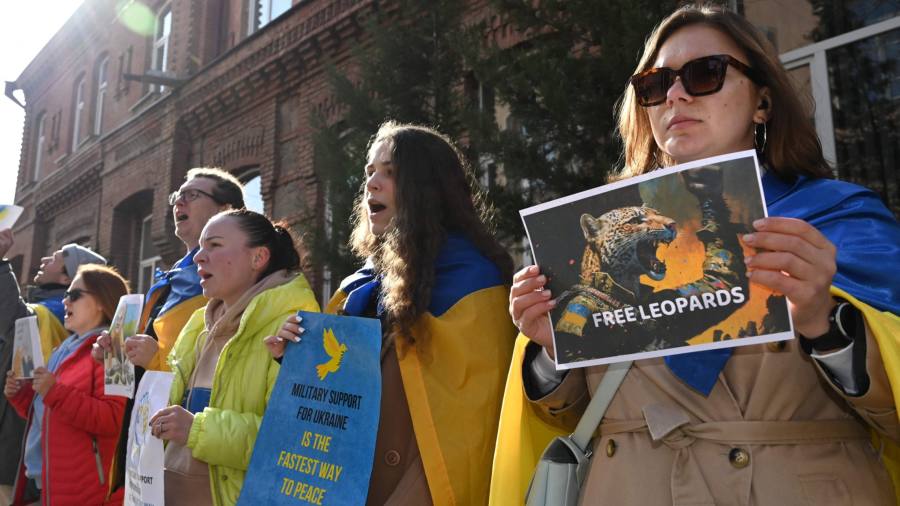 The US and Germany will send main battle tanks to Kyiv, a significant increase of western military aid that was condemned by Russia and prompted cheers throughout Ukraine.

The US will be sending 31 M1 Abrams tanks to Ukraine — or the equivalent of one Ukrainian tank battalion, senior Biden administration officials confirmed on Wednesday.

Earlier in the day, Germany announced it would send 14 Leopard 2A6 tanks from stocks held by its army. Berlin also announced plans to team up with other European countries to create two tank battalions of the German-made Leopard 2s, which equates to about 90 tanks.

Both the Abrams and the Leopard are among the best-rated modern main battle tanks in the world and Kyiv has argued it needs them to break through a front line that has barely budged in recent weeks and reconquer occupied territory. It also says it needs western tanks to deter a renewed Russian offensive that is expected in the early spring.

The co-ordinated US-German decision puts an end to months of hesitation in Berlin, where officials pondered the risk of escalating the conflict, and in Washington, where their prospect of getting the heavy vehicles on the ground in Ukraine did not seem practical.

“Armoured capabilities will improve the Ukrainian’s ability to manoeuvre, which is a critical asset for Ukraine as they continue to defend and reclaim their territory,” said one senior US administration official.

The US move to send tanks to Ukraine comes after a flurry of diplomatic activity in recent weeks aimed at stepping up support to Ukraine, particularly between Berlin and Washington, where officials in both capitals dropped their resistance to sending the advanced weapons systems in recent days.

“It’s an impressive display of unity nearly a year into the conflict,” one senior Biden administration official said. “President Biden’s guiding principle throughout this conflict has been to rally the world to support Ukraine and maintain allied unity — and that’s exactly what’s happening here.”

Speaking in parliament earlier on Wednesday, Scholz said that Germany would “always be out ahead when it comes to supporting Ukraine” and dismissed criticism that he had hesitated too long in heeding Kyiv’s calls for help. The chancellor said that when it came to military aid “we have to co-ordinate closely with others”.

Scholz said that whenever Germany had stepped up its arms supplies to Ukraine — providing tank howitzers, rocket launchers, air defence systems and infantry fighting vehicles — it had only done so “after our most important alliance partners in North America and here in the EU had acted in a similar manner”.

He also said Germany would stand by Ukraine “but must at the same time prevent the war escalating into a war between Russia and Nato”. Many in Berlin had feared that sending tanks would increase the risk of a direct confrontation between Russia and the transatlantic alliance.

Nato secretary-general Jens Stoltenberg said the decision “can help Ukraine to defend itself, win and prevail as an independent nation”.

“I strongly welcome the leadership of [Scholz] and Germany in providing Leopard 2 tanks to Ukraine in consultation with other Nato allies and partners,” he added.

As well as announcing its own supplies of tanks to Ukraine, Germany, which as manufacturer of the Leopards has a say over their resale and re-export, said it would give the green light to all countries who wanted to send their Leopard 2s to Kyiv.

It also said it would start training Ukrainian soldiers to use the weapons system. In addition, the package on offer to Kyiv will include logistics, ammunition and maintenance of the Leopards.

The Abrams tanks would take “months” rather than “weeks” to reach Ukraine, so their impact on the battlefield would not be immediate, the senior US official said. A “significant amount of training and maintenance” was required for the Abrams and the Pentagon was already working to get Ukraine the fuel and equipment needed for them to operate the tanks. The US was also planning to provide eight M88 “recovery” vehicles to Ukraine to help repair any damaged Abrams tanks.

Russia’s ambassador to Germany, Sergei Nechayev, said the German move was an “extremely dangerous decision” which “raises the conflict to a new level of hostilities”. He accused Germany of neglecting its “historical responsibility to our country” for the Nazi invasion of the Soviet Union in the second world war and choosing a “permanent escalation” of tensions over the war in Ukraine.

The US move to supply Germany with Abrams tanks was also “doomed to failure”, said Dmitry Peskov, President Vladimir Putin’s spokesman. “They are clearly overestimating the potential this will give the Ukrainian armed forces.”

News of Germany’s decision to send its tanks to Kyiv was met with jubilation by Ukrainians, who showed their excitement and appreciation online — especially sartorially.

In a social media “flash mob” organised under the hashtag “#freetheleopards”, Ukrainians shared photos of themselves dressed in leopard-print shirts, coats, trousers, bodysuits and sunglasses.

Ukrainian politician Inna Sovsun shared a photo of herself wearing a leopard-print blouse inside the parliament hall. Soldier Dmitry Mrachnik posted an image of himself brandishing his Kalashnikov rifle and draped in a leopard-patterned blanket he’d slept under on the frontline for months.

“I don’t wear leopard print normally, but for tanks I’ll do this,” journalist Anastasia Stanko told the Financial Times.

Tetiana Shevchuk, legal counsel for Ukraine’s Anti-Corruption Action Centre, said that Ukrainian women were now discussing what clothes to wear to bring attention to Ukraine’s need for American F-16 fighter jets. While the aircraft’s official name is the Fighting Falcon, it is affectionately known as the Viper because of its resemblance to the snake.

“I think I’ll need to get something in viper pattern,” she said.