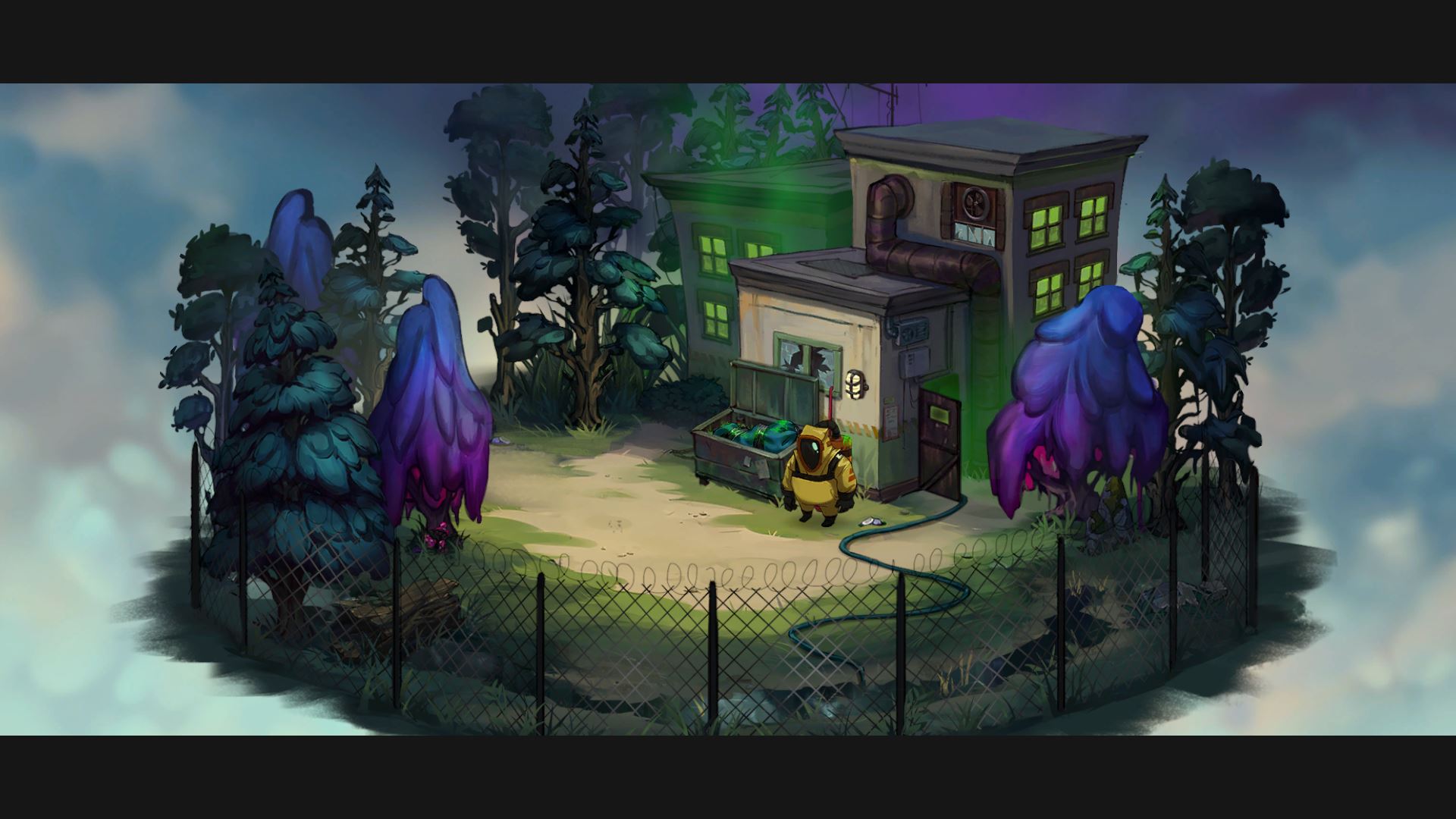 With an aesthetic that pops off the screen, I couldn’t help but try out Hiding Spot’s Beacon Pines during a recent rush of demos.  At the outset, the developers make it clear that this is no child’s game despite the cute and colorful veneer. And though that’s true, I’d say it certainly falls under the banner of “young adult” or “teen” stories. This is not a criticism, but would-be buyers should understand what they’re getting into because Beacon Pines presents one course at the start and doesn’t necessarily deliver on seemingly lofty expectations.

Meet Luka, a middle school-aged, anthropomorphic cutie pie who lost his mother and father in recent years. With the support of a close friend and his grandmother, he maintains a surprising degree of resilience, bravery, wonder, and general likability despite his challenging circumstances. He lives in, you guessed it, Beacon Pines—a small town nestled in the woods that once prospered under the leadership and technology of Sharper Valentine. Unfortunately, Sharper passed away during a catastrophic event known as the Foul Harvest, in which his groundbreaking fertilizer somehow led to terrible, irreversible effects. Beacon Pines struggles to survive, as several inhabitants have skipped town in search of greener pastures.

In its current state, Beacon Pines has earned the curiosity of a corporation known as Perennial Harvest, all while the Valentine family tries to rebuild and maintain its legacy. Something is amiss, though, as Luka ventures out into the woods and rediscovers a once abandoned facility brimming with activity and an eerie glow. As fate might have it, Luka quickly finds himself kidnapped and lost forever. The end.

That is the gameplay hook of Beacon Pines. When the story meets an unfortunate conclusion, the narrator—who is outstanding, by the way—chimes in to express woe and offers the player (that’s you) the opportunity to throw a different word into a critical spot in the book. This word changes the story entirely and either spurs the current story thread forward or creates a completely separate path. “This is a story about change” is emphasized throughout the narrative. Wide-eyed and excited, I thought, “This is a choices matter game! I love those!”

Beacon Pines is about as linear as it gets. I have a sneaking suspicion the developers sought to create a non-linear adventure, but continuity issues and the amount of work that might entail probably seemed unrealistic. Which is fine, I suppose. While the linearity isn’t inherently bad, the game almost boasts that players have agency over how the story unfolds. We don’t. That said, changing the timeline is fun, and seeing how one simple word can change so much is almost always exciting.

While walking around the isometric, diorama-fashioned town, players can observe the environment, talk to citizens, and retread old paths (most of the time). Venturing off the beaten path and going to places the game doesn’t intend players to go doesn’t lead to anything of note. No fun secrets or Easter eggs exist, and I tried to find them. Players semi-randomly discover new words (e.g. “sneak” or “shame”) when talking to people and clicking on the environment when requisite speech bubbles emerge. When that story thread with new words ends, the narrator once again greets the players and offers a change in outcome, be it in the current thread or a branch somewhere prior. The characters in the game don’t know any different, but you do for the sake of understanding the story.

There is not much to the gameplay, as Beacon Pines feels almost entirely on rails, but the story is actually well-told. At the outset, I was struck by how some characters, particularly Luka’s father, speak. A good deal of meaning and depth is communicated through a few subtle words, but this tapers off with time. Soon after the beginning, the writers try to drive the plot full throttle with little character development or philosophical intrigue. This engaging mystery is about the central narrative and not much else. Again, not necessarily a detractor, but potential buyers should know what they’re getting.

Some may feel Beacon Pines flows a bit too slowly, but enough clues and new elements are introduced that I never felt bored. At the same time, I was never frothing with anticipation. Instead, I was mildly intrigued and amused throughout most of the game. Once more, this is less a harsh criticism and merely another point to consider. However, I found the writing incredibly rushed near the end of the game. Exposition flowed freely, and the characters’ irrational actions were inconsistent with prior behavior. The ending was fine, but some heartfelt moments were lost on me because the focus shifted away from the characters.

Beacon Pines’ outstanding presentation, both in terms of visuals and audio, maintained my interest. The artwork is second to none in terms of style, and the characters ambulate charmingly, boasting a degree of personality. Each screen, domicile, and piece of junk on the ground has a degree of detail that breathes life into this world without compromising its cartoonish vibe. Musically, I loved almost every single track, whether coupled with a tension-inducing or emotionally gripping scene. As mentioned earlier, Kirsten Mize, the game’s narrator, does a phenomenal job reading off the page and chatting with the player. Her acting here is some of the best I’ve heard in video games.

Beacon Pines is a special kind of game in that it doesn’t strive to be more than it should be. That’s praise, by the way. At its core, it is a mystery title about conspiracy and larger-than-life problems; no deep human insights, no world-ending machinations, and no shoe-horned gameplay. Beacon Pines might not strike our fancy for those of us looking for something more than a small-town mystery, but if a simple romp with cute animals told with superior visuals and music is what you’re after, then Beacon Pines will sate nicely.