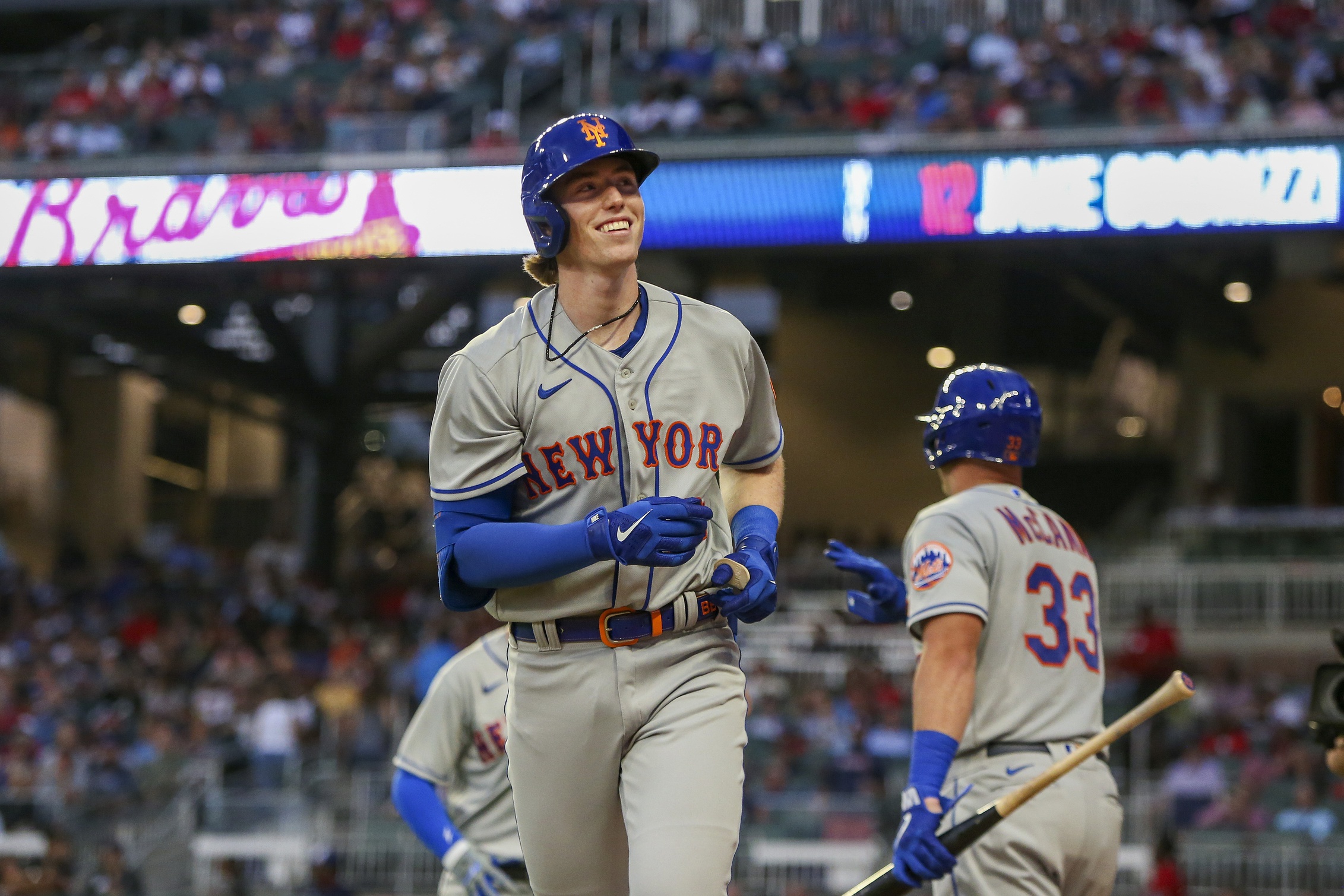 As he recovers from thumb surgery, there may be some hope for Mets rookie third baseman Brett Baty to return if the team makes a deep postseason run. But if we don’t see him at Citi Field again this year, Baty has already provided a promising glimpse of what kind of excitement he can provide next season.

In a recent interview with The Game Day, he made it apparent that his first stint in the majors, while brief, was a very worthwhile experience that garnered much positive feedback.

Baty played in only 11 games with the Mets before his regular season ended, but he hit two home runs, one of which was dramatic and memorable, as all followers of the team already know. On Aug. 17, Baty became the fifth Mets player in franchise history to homer in his first at-bat.

He did it with his family watching jubilantly at Truist Park. Baty launched a hanging curve from Jake Odorizzi for a two-run shot to boost the Mets to an important victory over Atlanta.

“It was awesome,” he said. “I was just looking for a pitch that I could drive, he left one up, and I ended up getting it out. It was a great feeling to get my career started off like that.”

For Baty, it was the beginning of a whirlwind introduction to the majors. He notched three hits in each of his first three games, with four RBIs on the road in two dates at Atlanta and one at Philadelphia. Baty leaped into the cauldron of intense and highly significant NL East matchups and then found himself playing in two games at Yankee Stadium.

He played only six games at Triple-A with Syracuse after logging 89 games at Double-A with Binghamton before he was called up.

“I was just doing my thing in Binghamton and got a quick taste of it in Syracuse and then did a spot up here and was filling it to the best of my ability,” he said.

Baty reveled in the intensity of the divisional games and being part of the most passionate local rivalry in MLB.

“I was thrown right into the fire, starting in Atlanta, then went to Philly, and then the Subway Series. Those were three tremendous series right off the bat. It was a great atmosphere,” he said of the two games in the Bronx. Following the Yankees series, Baty hit his second homer vs Colorado at home on Aug. 26.

Throughout his first trip through the majors, Baty has been getting a lot of support from the coaching staff and his teammates. Joining the big-league club during a key portion of its run to a postseason berth might appear daunting for a 22-year-old getting his first chance to contribute. But Baty said he was fortunate to get a lot of assistance and assessments from Eric Chavez, who has been a big reason why the Mets have sported a top-five offense in 2022.

When a young player arrives in the majors for the first time, it is customary for seasoned veterans to show him the maps to success on and off the field. This 2022 Mets team is already known for its good chemistry and tight-knit clubhouse, so Baty naturally had several new teammates offer their insights to help him adjust. He said they were very encouraging while offering observations on his early work in the field and at the plate.

“Defensively, Francisco Lindor has been a great help on the left side of the infield,” he said. “It’s just been awesome to have a Gold Glover over there. Eduardo Escobar was helping me out defensively, too. On the offensive side, it’s been Pete (Alonso), (James) McCann, (Daniel) Vogelbach. They’ve all been saying that my ABs have been good.”

As a first-round draft pick in 2019, Baty arrived with the Mets with much anticipation from the fan base. He only played three games at Citi Field this season, but he had hits in all of them. Even if we don’t see Baty again in 2022, he has already given the team’s followers flashes of what they can look forward to from him in the future.

Baty made sure to soak up every moment from his first run with the Mets. Performing in games of high consequence seemed to make the experience greatly fulfilling, and he can also assure that he will be better prepared for the bright lights of playing for and in New York next season.

When reflecting on his first opportunity to wear the uniform, Baty ended his description with a Mets buzzword that may indeed demonstrate that he is already on a path to becoming a fan favorite.