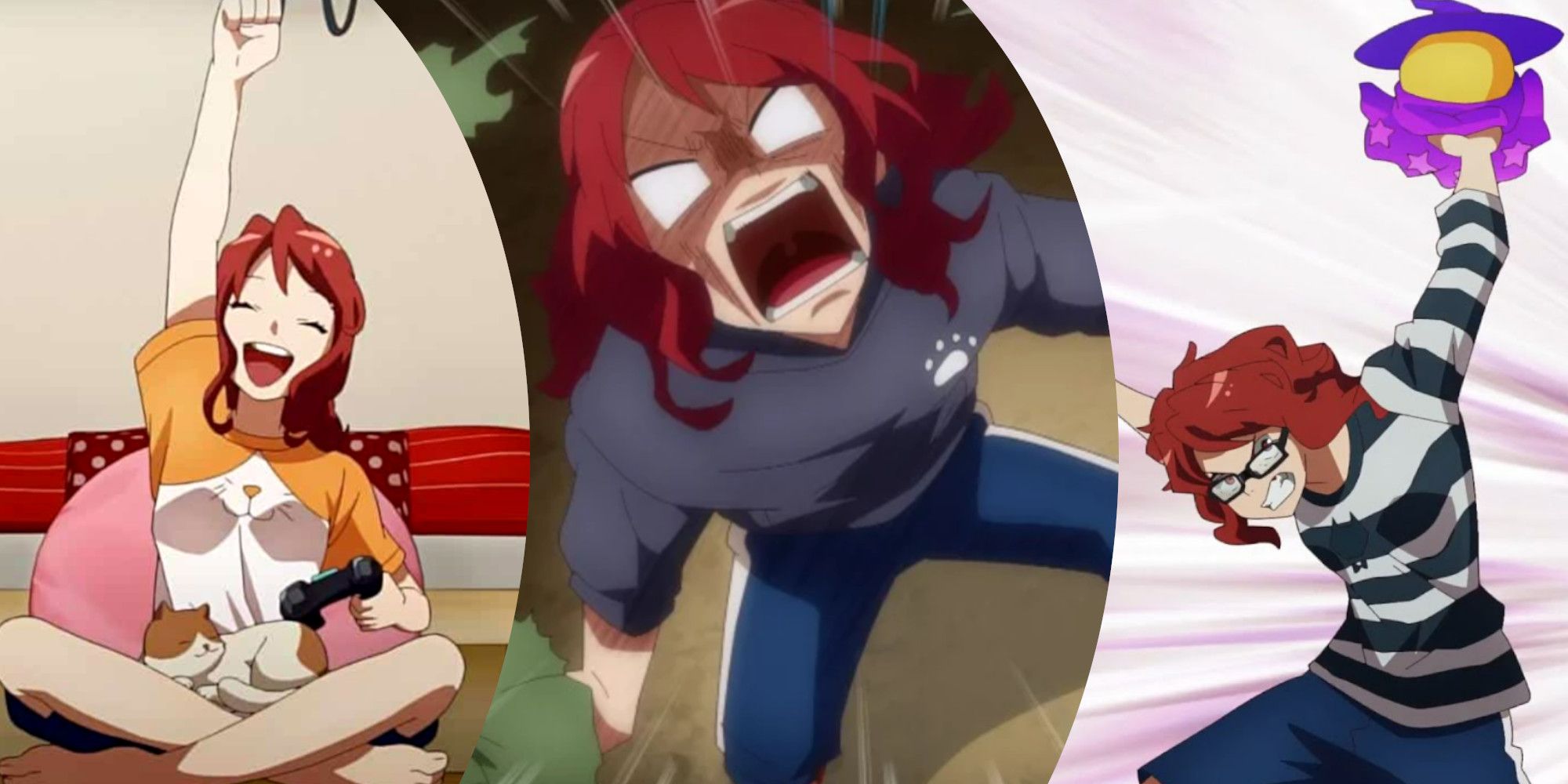 When one dies but is fortunate (or unlucky) enough to get a second chance in another world, there are certain standards that they are expected to conform to if they have any hope of succeeding in their otherworldly, often magical, adventure. This wildly popular trope is quite common within the anime industry, forcing creators to think outside of the box with their character designs and break a few rules along the way, which Anzu Hoshino does, quite ineloquently.

RELATED: Romance Anime To Watch If You Love More Than A Married Couple, But Not Lovers

With gaming Isekai, the iconic death scene usually gets replaced by a life-changing “Play” button that makes their virtual pastime a reality, which is the unfortunate trap that Anzu falls into at the beginning of Romantic Killer. She is, however, on high alert from thereon out and does her best to outsmart her captor and return to the “real world,” unscathed, with her prized treasures in tow.

The Isekai genre is renowned for regularly casting a male hero in the starring role while the female deuteragonist loyally tags along, adding her own quirky characteristics to the adventure. Anzu would never stand for such a thing and refuses to be sidelined or allow a silly boy to distract her from the ultimate mission, which also subverts the norm by avoiding any romantic pairings.

Even the strongest Isekai girls, such as Sword Art Online’s Asuna, essentially act as support characters to the male protagonist or fall into the damsel in distress category if they manage to avoid the Tsundere role first, that is. While Anzu is rather abrasive, she has carved out her own path as the leading lady and anti-heroine of Romantic Killer and unapologetically disregards any expectations one might have placed upon her.

7/8 Not Really Another World

The whole plot of Isekai revolves around a character being reincarnated into another world; however, in Anzu’s case, the changes in her alternate reality are so subtle that it is barely noticeable (just don’t make eye contact with the bouncy yellow blob!) Her entire life is abruptly turned on its head when her parents relocate to the States and drag her beloved Momohiki along with them, leaving her living alone, without a video game or a drop of chocolate in sight.

RELATED: Isekai Characters Who Likely Wish They Were Never Summoned To Another World

Magic is also suddenly a contributing factor to Anzu’s day-to-day life, and Riri does his best to force Anzu into the role of “Romantic Thriller’s” real-life avatar with little success. Things feel slightly off-kilter for this feisty-feline lover, but overall, her world is essentially the same as before; life is just set to Hard Mode now.

While Unwanted Harems are not terribly uncommon (particularly in modern storytelling), they do still defy the classic Isekai norm, especially when such a strong Shojo narrative is influencing the state of affairs. By relentlessly shutting down her suitors, Anzu acts like the traditional celibate hero to a degree; however, she doesn’t often have to apply any self-restraint to her own affectionate feelings (like in most chivalrous situations).

True, this cynic struggles to disregard her Harem’s individual attributes and briefly considers the prospect of dating by the end of the series, but all-in-all, Anzu is happy to have a group of great friends (in addition to her three vices, that is!) Who knows what the future may hold, as the typical Isekai lead usually chooses to stay in Another World for the sake of their love interest, will this anti-heroine eventually follow suit?

Generally speaking, when a character is unceremoniously reincarnated into another world, they face many epic tasks ahead, often with dire consequences. While Anzu may feel like her life is over, from an outsider’s point of view, her grievances aren’t that severe, as many people could function without chocolate, feline companionship, or video games. However, for Anzu, this is life or death!

While Anzu is essentially sucked into this situation due to the problematic population decrease in Japan, adding one successful couple to the mix isn’t exactly going to tip the scales significantly. This is “Romantic Thriller’s” trial run, after all, so maybe if Anzu’s failure is completely disastrous, the meddlesome wizards won’t subject another unsuspecting victim to this frivolous torture again.

4/8 A Toast of Tardiness

A classic Otome trope depicts a young lady dashing out of the house with a slice of toast in hand after inconveniently oversleeping, which has left them late for school. Amidst the chaos, the beautiful damsel crashed head-first into her soon-to-be sweetheart, creating the perfect meet-cute for any love story. This clichéd Shojo narrative is regularly referenced but not often copied outright, but Romantic Killer reenacts this entire scenario and simply adds a gender bender to spice things up a bit.

Regardless of how handsome and prestigious Hijiri is, Anzu is immediately put off by his egotistical attitude (and is on high alert for an impending romantic intervention after recognizing the trope herself). Riri’s foolproof plan is thwarted despite everyone’s best efforts, as Anzu’s heart does not instantly melt the moment she lays eyes on the “Prince” (although the same cannot be said for the blonde-haired boy).

Romantic Killer has a rather tame magical element compared to most other Isekai adventures, with Riri being the only one capable of conducting supernatural feats (for the most part). Whereas most reborn heroes have a tough time adjusting to their new setting, they are often blessed with a “cheat skill” that grants them the upper hand in certain situations to make life slightly more bearable. However, Anzu herself does not possess any mystical, overpowered abilities unless one counts being an aromantic killjoy as a talent.

Ironically, Anzu’s rowdy personality traits would allow her to transfer quite seamlessly into a stereotypical RPG-inspired role; however, she is never granted the chance (and is forced to go along with this absurd otome gameplay instead). Her timeline also remains unaltered, so there are no Modern Knowledge advantages to work with either; talk about getting the blunt end of the stick!

The Isekai heroine is often added to the storyline to steer the male protagonist in the right direction, offering words of wisdom and valuable support along the way. Anzu, however, leaves this task to her Harem and then promptly ignores their efforts of seduction, never truly accomplishing the quest of finding love (which would be a major issue in the dating-sim game this whole scenario is emulating).

Much like Uncle From Another World, Anzu does not react to the narrative in the expected fashion and would rather take the easy way out than have to deal with unnecessary admin along the way. She does not even attempt to construct a faux romance to see if that would lead to her escape and simply rebels against the entire system from the get-go, initiating her stubborn act of defiance and holding on for dear life.

For this rambunctious redhead, “home” is where she can dote on Swordsman Musashimaru, Lord Matthew, and whatever fictional character catches her eye, with her furball, Momohiki, by her side and a face stuffed with chocolate. In contrast to the standard Isekai narrative, Anzu fulfills her ultimate goal in the end by reuniting with her vices once more, yet still finds herself trapped in her Other World disaster due to her lack of romantic interest (where she will probably remain at this rate!)

Due to Riri’s undisclosed feelings for the anti-heroine, the wizard got himself into some trouble with authorities and had to pay with his freedom; however, thanks to some keen negotiation skills, Anzu’s confiscated items are returned in the process. They will, however, be reappropriated again if she makes no further developments in her love life, and if she is still single by the end of high school, they will disappear forever. An Isekai hero with no way home has to reassess their situation (which, in Anzu’s case, may involve admitting defeat and puckering up).

MORE: Comedy Anime To Watch If You Love Uzaki-chan Wants To Hang Out!